close
He is a Rock, he's on an iiiiiiisland 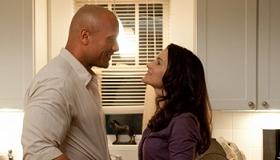 In Journey 2: The Mysterious Island, High School Musical star Vanessa Hudgens lands on an unchartable land mass spring-loaded with a ukulele but never hums a bar. Meanwhile, ex-wrestler Dwayne "The Rock" Johnson sings a comic rendition of "What a Wonderful World," as mini-elephants prance by (each smaller than his biceps) and bugs the size of Volkswagens tend tree-sized flowers. It's all upside down in Brad Peyton's oversize kid's film. Sean (Josh Hutcherson), the boy star of Journey To The Center of the Earth, is now living with his mother as original movie dad Brendan Fraser couldn't be persuaded to join the sequel. We can't have a mom star in an adventure, so now it's his step-father Hank (Johnson), in the world's most expensive bonding trip, who flies him across the world just to prove that Sean's long absentee grandfather (Michael Caine) was totally nuts for claiming he's found Jules Verne's "Mysterious Island," and that Hank himself is only father figure Sean can trust. (It sounds a lot less sinister when The Rock explains it.) Surrogate fathers and family values are at the foreground, making the film a quick sell to parents-especially as it boasts the added value of literary roots. Safe box office earnings are assured even after the swift third week drop-off.

Hapless Pacific Islander pilot Gabato (Luis Guzman) is the number one victim of Sean and Hank's plot to reach the topsy-turvy island. Number two is his more resourceful daughter Kailani (Hudgens) who helps him with the family business running island tours via a hoopty helicopter. All this poor dude wants is to send his kid to college, but there they are: leaving one isolated paradise to get stuck in another where the next roving field lizard would be their stairway to heaven.

It would be Final Destination for them all if the giant birds and the bees of the Mysterious Island weren't 100 percent stinger-free and as toxic as giant bird poo. The real threats here aren't from island fauna—they're from the two fathers and estranged grandfather who battle to save their egos and authority in this storm-swept land that turns out to be a swiftly sinking Atlantis. While, Hank, an ex-Navy officer, thinks he deserves credit for helping Sean reach the island with his award-winning decoding skills, once they're there, Caine's Grandpa Anderson is so threatened by this big man now banging his son's ex-wife that he retaliates with impotent cracks at Hank's authority.

Though no one is at a loss for love, these family units are broken and the best you can say about the menfolk's salvage attempts are that they're are noble...in their own ways. Hank thinks he's found his in when Sean asks him for girl advice about winning over Kailani. "Getting the attention of a woman is a hard thing to do," says Hank, which is crazy because I'm a woman and I spent that movie trying to ignore Johnson's rock-like nipples—and that's before he started popping berries off his pecs in 3D.

Though Journey 2 is no emotional masterpiece, it does provide a view of surrogate parenting that recognizes both the hardships and the honor involved in doing the job well. Johnson, despite owning mammary glands bigger than mine, is a great role model and his humor is thoroughly conducive to the kiddie crowd the film will most likely attract. At one point he calls his right hook a "thunder cookie." I shuddered, but your neighboring 8-year-old will giggle—and isn't that what it's all for? Still, thunder cookies may be part of Johnson's plan. In an interview this week, he said, "Right now the best way that I can impact the world is through entertainment. One day, and that day will come, I can impact the world through politics." Today's kid cracking up as Johnson punches a lizard will soon be tomorrow's Minnesota primary voter. The Rock for President? Heck, we could do a lot worse.