close
Get popular—and get a permanent record 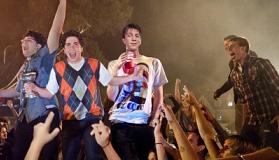 Dweeby Thomas (Thomas Mann) is turning 17 and his BFF Costa (Oliver Cooper) is determined to throw him a party crazy enough to get him laid. (What these kids know about sex and lawlessness they learned from song lyrics.) Is it possible to reform the identity of a kid when even his dad thinks he's a loser? Superbad and Virginity Hit cross streams for another beer-soaked, bong-fueled "paste party montage here" barn burner for a generation who never knew a world without Jackass. At first, repercussions seem impossible. By the end, they're so horrible you think the kids'll never survive. You'll have 101 physical reactions—and among them, laughter. Dollar prospects don't seem so bad when you realize it's up against The Lorax.

Thomas' birthday and his parents' anniversary are on the same weekend, and since his parents don't expect a second of derring-do out of their timid kid, they ditch him for an entire weekend. ("Here's $40 for pizza and I'm not stupid. Just no kids in the study and don't touch my Benz.") Whatever fiendish things Thomas' pal Costa might say about cool manhood and hot women—the two being inextricable—he's good on his feet and fully expects that between his wiles and his family's attorney, there's just about nothing he can't get away with. So Costa advertises the party to end all parties at Thomas' two-story Pasadena dream home, complete with pool and gazebo and cute neighbor girl. It's threatening when one text lights up a classroom of phones but when we hear about Costa's secondary marketing methods...it gets a little scary.

Immediately it's clear that while these kids are resourceful and smart, confidence can't be gained in a night. What they can accomplish by dawn is the fabulous horror of disregarding laws, decency and home owner's rights, which is really all we can hope to see in a film like this one. As the night wears on, the odds of surviving the party unscathed grow increasingly distant—but so does your desire to care. Like the party itself, you reach a point when you feel like you could check out for the night. "It was fun but...I got stuff to do in the morning."

With a budget that permitted the complete destruction of a fake Pasadena street (including one house interior, a pool and multiple cars) it's surprising the super-cheap found footage aesthetic was employed so liberally and loyally. Its presence and integration with the camera phone footage "taken" by the kids in the film suggests the audience most tolerant of this look might still be under 20: ie, underage drinkers. Hangover director Todd Phillips produced, positioning this as The Hangover for teens, while the presence of Joel Silver, producer of The Matrix and almost everything else, signals confusion. Each young actor in this cast of no names gets their moment to shine, and all are competent enough not to be distracting. But the film spends forever covering party shots that aren't as inherently interesting as when it bothers to cram a midget into an oven. Still, the film's strength isn't its shock tactics—it's the rapid-fire, party montage editing that finds a million natural ways to put mundane actions and moments up against each other for comic effect. Like the weaker cousin of Superbad (which, it's been said, "slowed down" for character and plot development) it has long music video-inspired sequences that really just pass as advertising space for the soundtrack. You know, so your kid can purchase it and throw a rager and maybe make you some enemies on the block and lure punks and PTSD-damaged drug dealers. Maybe Kanye West will show up—isn't that every dweeb kid's dream?