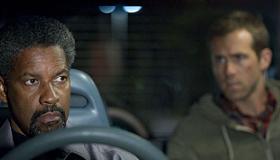 The latest entry in the action flick sub-genre of "Denzel Washington is a total badass," Daniel Espinosa's Safe House sets the gruff two-time Oscar winner against a baby-faced Ryan Reynolds in a mix of politically-tinged actioner and cat-and-mouse thriller. Washington stars as Tobin Frost, former CIA agent-turned-rat, who after a decade on the run turns himself into the American consulate in Capetown to escape getting blown away by some heavily armed bad guys. As the inexperienced "housekeeper" of the CIA's primary safe house in the same city, Reynolds' Matt Weston is tasked with keeping his guest, well, safe-which isn't an easy feat when a band of thugs blast open the front door, shoot everyone on site, and force Weston and Frost to go on the run together while the latter stays handcuffed. Espinosa's attempt at a stylish thriller is really just a loud excuse for some extended chase scenes, but Safe House's highly marketable cast and accessible brand of action should give it big business at the box office.

A year spent in a sleepy safe house doing nothing but bouncing a tennis ball, practicing his French, and waiting for the phone to ring have made young CIA agent Matt Weston restless. Twelve months as the housekeeper for the agency's central safe house in Capetown, South Africa haven't amounted to much, and Weston is desperate for a new detail or, at the very least, the chance to prove to his higher-ups (especially Brendan Gleason's David Barlow) that he can handle a harder gig. Which is why it's so fantastically convenient that on the same day Weston begs for a promotion, master manipulator Tobin Frost-an enemy to intelligence agencies everywhere-has been transported to Weston's very same safe house, for interrogation and information-gathering (read: waterboarding) by one of the CIA's elite teams while a wide-eyed Weston watches through a pane of security glass.

Before said elite team can get much of anything out of Frost, their secure location is blown to smithereens, leaving Weston as the sole CIA survivor in charge of bringing the dangerous former agent to justice. Together, Weston and Frost embark on a heart-pounding dash through Capetown, tailed by both the shady fellows who are after Frost, as well as Weston's disconcerting suspicion that while Frost is a bad dude, it might not be for the reasons his employers say. Meanwhile, CIA heavies Barlow, Harlan Whitford (Sam Shepard), and Catherine Linklater (Vera Farmiga) attempt to pull the strings on a mission that's gone unexpectedly and completely wrong.

Safe House isn't the most original of plots—it feels like a loose amalgamation of ten other spy flicks—but director Espinosa infuses his production with some bold choices, both in terms of technics and twists. The film's action sequences are absolutely top-notch, and Espinosa's often gritty, documentary-like style of filmmaking lends an immediacy and accessibility to even the loudest and jumpiest of scenes. And while Reynolds is undoubtedly the leading man of the film (and its moral center to boot), Espinosa and screenwriter David Guggeneheim aren't afraid to force him to get his hands dirty. Reynolds is a likable actor, which shines through his portrayal of Matt Weston and keeps him engaging to audiences. It quickly becomes apparent that the bulk of the film's consequences will fall on the hapless young agent, and Reynolds does a fine job of making moviegoers care about what happens to him.

Though the film's total runtime could benefit from a ten-minute trim, the film isn't exactly long on exposition besides some fast and loose CIA debriefings that present pertinent information about Frost and Weston. Unfortunately, not much of what Guggenheim and Espinosa tell us about either character ever means much—we know that Frost is a "master manipulator," but few of his obvious attempts at manipulation work on Weston, and while we're told that Weston has an aptitude for "trade craft skills," he doesn't so much as build an effective restraint to hold his prisoner. They're small quibbles, but they get to the root of what holds Safe House back from being excellent rather than merely entertaining: the film thinks it's far more intelligent than it actually is.

But despite those missteps and mistakes, Epsinosa, Guggenheim, and their cast deliver on an exciting film that's elevated by gritty, breathtaking action sequences including impressive hand to hand fighting and two large-scale chase scenes through colorful and original locations that wouldn't be out of place in a Jason Bourne flick. Safe House is absolutely entertaining, and it should serve as clever counter-programming for audiences looking for something different amidst the multiplex's other, less bro-mantic Valentine's Day offerings.