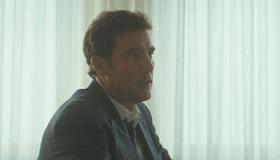 The old adage has it that history repeats itself—the first time as tragedy, the second time as farce. Apparently, the same holds true of historical dramas about the IRA. They were a virtual subgenre in the 1990s, but were all but killed off by 1996's epic and idiotic Michael Collins, which recast the birth of the Irish Republic as a contest between Liam Neeson, Aidan Quinn and Alan Rickman over who gets to sleep with Julia Roberts—in other words, as an Irish Gone with the Wind.

But Collins was the soul of political sophistication compared to Shadow Dancer, an awkward melding of the espionage thriller with the political drama of ideas that was funded in large part with English tax dollars through the BFI and the BBC. The thriller conceits are less than thrilling, thanks to British director and seasoned documentarian James Marsh's uncharacteristically lax staging and a general editorial lassitude. And the political ideas? Noxious, reactionary and unashamedly pro-British to a startling degree. Since the only American markets for movies about Ireland are in urban ethnic enclaves that aren't remotely receptive to a "Rule Britannia!" take on Irish events, it's hard to see how there's an audience in the U.S. for this film. Thriller junkies are also likely to be disappointed.

Shadow Dancer is the story of Collette McVeigh (Andrea Riseborough), an IRA militant with an atypically French first name, who is captured and "turned" by MI5 agent "Mac" (Clive Owen, still wishing he was playing Bond) after planting an unexploded bomb in a London tube station in 1993. Collette is persuaded to spy on her compatriots for the sake of her young son, and then re-inserted into her IRA cell, which includes two of her brothers and a suspicious superior. Danger and betrayal follow Collette's every move, including bureaucratic drama between Mac and his superior (Gillian Anderson, looking very Maggie Thatcher) which feels borrowed from other, better stories, most of them written by John le Carré.

Whatever you think of the IRA, the British legacy in Ireland is a horrific one, and the split governance model negotiated way back in 1922 has proved a catalyst for enduring tensions and occasional explosions of internecine violence. As a result, British films about Ireland and politics usually reflect a kind of national remorse over the mess made of England's neighbor, with ambiguity and anti-violence messaging a given. Even when the IRA is derided or criticized, there's usually an attempt to understand its historical motivations.

No such niceties are on display in Shadow Dancer, where the only honorable character is Owen's heroic British agent, and where the Irish are uniformly without conscience, loyalty or any redeeming features other than the familiar lilt in their voices. Even the traumatic childhood event that turns Collette and her brothers toward political struggle—the shooting of their young brother Sean on a Belfast street during the upheaval of the 1970s—is revealed during Collette's MI5 interrogation to have been perpetrated not by the British as Colette believed but by the IRA she serves. Collette's seemingly awakening conscience (brought about, of course, by Mac's steadfast support, stiffly British upper lip and soulful green eyes) proves a sham in a sudden and explosive plot twist so obvious this reviewer had his fingers in his ears well before it occurred.

As Collette, Riseborough does a fine job playing a woman haunted by both present and past. But it's somehow unsurprising that an alleged paragon of Irishness is played here by a British actress, since an Irish one might have been appalled by the political simplemindedness of Tom Bradby's screenplay, which is based on his own novel. Perhaps it's a hopeful sign for Ireland that a British production company sees Ireland's historical tragedy as fodder for an empty nationalist genre exercise—an indication, as all those American westerns demonizing Native Americans were, that the filmmakers see nothing immediate at stake in stories of this type, that a long national nightmare is receding somewhat into the past. If so, that's the only good thing to say about Shadow Dancer, and it's far from enough.