close
The D in 3D stands for disappointment 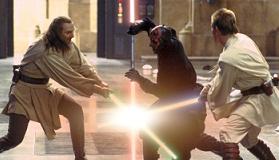 Although the buildup has been oddly almost as feverish as upon the film's original 1999 release, Star Wars: Episode I - The Phantom Menace 3D has unleashed a unique kind of moviegoing anticipation: nostalgia for disappointment. It's virtually impossible to watch George Lucas' first film in the Star Wars prequel trilogy without any attachments or associations, particularly torment, condemnation and, in lesser measures, self-justification, and this re-release now exemplifies Lucas' willingness to capitalize on his bruised but devoted fans. Though he's not rewarding their support, expect box office numbers to be modestly strong, although perhaps not enough to sustain the series' 3D commercial viability through five more installments.

While I was never a "George Lucas raped my childhood" sort of fan, The Phantom Menace was, definitively, the film which ended my adolescence as a moviegoer, the first time I clearly felt that my affection for a property wasn't enough to overshadow the shortcomings of its execution. As such, it feels irrelevant to attack the minutiae of its mythology or its tenuous connections to the Original Trilogy—there's enough reasons to attack it merely for its storytelling. By the mid-'90s, Lucas had become the cinematic equivalent of Michael Jackson, a superstar so fortified by yes-men that his creative impulses were irreversibly dulled, and Episode I is the proof: his populist political ideologies and simplistic messages don't merely feel like they were made for children—they feel like they were made by them.

Take the fortune cookie weight of Anakin's mom's assertion that "The biggest problem in the universe is that no one helps each other," a blandly sweet statement that isn't even tethered to the narrative. What the film really does is argue in favor of the unpredictability of "the universe," and how karmic happenstance—not free will—controls people's lives. In fact, the much-reviled Jar-Jar Binks is the film's blinding metatextual comment upon itself: incompetence is not only accepted, it often prevails. And hammering that idea home, the actor playing him, Ahmed Best, gives a performance that by comparison makes Saturday-morning cartoon characters look complex.

But more than that, Lucas simply makes so many terrible, inexplicable choices in the character-building and storytelling that they become an impossible distraction. Why, for example, do each of the Federation droids have individual personalities, as seen in their buffoonish, stammering line readings, and yet they are all at once rendered inert when the hive mind that controls them is destroyed? What are the force fields in the "Duel of the Fates" sequence except a cheap device to divide Obi Wan from Darth Maul and Qui-Gonn Jin? And for that matter, why waste Darth Maul's potential in a first film when, say, the delay of his death until Revenge of the Sith could have provided both a true climax in the evolution of the relationship between Anakin and Palpatine?

Again, these aren't problems with the film's individual mythology. They're issues of character, structure and overall series cohesion, which underscore Lucas' deficiencies as a filmmaker. The climactic battle that takes place simultaneously on Naboo and in space is so cluttered with separate developments that there's no satisfying sense of resolution; when Anakin destroys the "mother ship," he seems no more knowledgeable about what he's done than the audience, and even his fellow pilots are confounded as to how and why they've emerged victorious.

As a 3D experience, The Phantom Menace is briskly engaging, if never quite immersive (or even distinctive) enough to justify a dimensionalized version. Although the pod race and several of the exterior shots of cities look fabulous in 3D, the technology is completely forgettable during interstitial conversations and adds nothing to the emotional heft of the film. That said, the re-release does uncover one truly great performance in Pernilla August's reserved, heartbreaking turn as Anakin's mother, Shmi. She operates on a plane that even Liam Neeson can't touch during their scenes together, which makes her abandonment on Tatooine that much more tragic.

But if this version leaves any significant impression on viewers, be they fans or critics, it's that they should view the film as it deserves to be seen: unadorned by expectation, measured by artistic and technical merit, and appreciated on its own rather than through the prism of larger feelings for the franchise. And by that standard, Star Wars: Episode I - The Phantom Menace is, at best and worst, a mediocre film—a boring adventure undermined by anemic political theatrics and the rusty artistic tastes of its maker. Of course, if this film generates enough success to greenlight the 3D re-release of the original trilogy of Star Wars, Empire Strikes Back and Return of the Jedi, I'll succumb to buying a ticket and taking those rides one more time. But this first reissue flops and Lucas and co. don't end up dimensionalizing the rest of the films, their absence will mark the first time in a long time that something Star Wars-related didn't disappoint me.