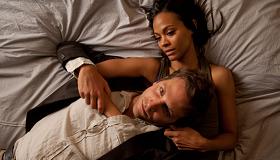 An appealing cast, top flight technical aspects, and a storyline that agrees with its intended audience's prejudices about the creative process could turn The Words into a minor hit. But as the major statements on art and life it yearns to be, chalk this one up as a failure.

Dennis Quaid is Clay Hammond, a Famous Author reading from his new book "The Words" at a fundraising event. The self-reflexive story he tells is of Rory (Bradley Cooper), an Unsuccessful Young Writer who finds the unpublished manuscript of a Great Novel in an antique briefcase while honeymooning in Paris with wife Dora (Zoe Saldana). Back in the states, Rory retypes the manuscript's powerful prose on his laptop, just to feel what being a Great Writer might be like. Dora mistakes the computer transcript for a new novel by Rory, and tells him he's a Real Writer at last. So Rory submits the book to an agent as his own work, gaining a Major and Award-Winning Bestseller in the process, but Losing His Soul too.

Give Klugman and Sternthal this much credit: the sliding-mirror structure of The Words indicates they are at least aware of tendencies in contemporary literature like "metafiction." They're also aware of Nicholas Sparks novels, and of undergraduate clichés about Great Writing: for example that it must be done in Paris if you're an American, that it is always the side-effect of Great Suffering, and that it can only be done in a spasm of obsessive creativity, as a byproduct of Inspiration rather than discipline or craft.

Rory's struggling artiste works at writing and The Words faults him for it; he's supposed to go out there and Really Live, like Hemingway, who is (of course) referenced here as frequently as he might be in a Freshman survey class on The Novel. When the guilt-ridden Rory uncovers information about the book he's put his name to, he learns its writer wrote it in anguish in just two weeks and then never wrote another word. In other words, it is the product of a creative seizure, or a vision from God—some mysterious transmission, not so much created as received.

It's easy to see why the same audience that would buy Jonathan Franzen novels when told to by Oprah's Book Club might find this anti-intellectual twaddle appealing. It says anybody can be a writer for one thing; that writing doesn't require effort, just bad luck and a typewriter. And artists are all hiding from life anyway, as Great Writer Dennis Quaid tells groupie Olivia Wilde after his reading. Art and Life, they're NOT THE SAME THING, Clay says, in one of several Big Statements declaimed from the screen in the final reel. And also: in Manhattan, it is VERY DIFFICULT TO FIND PARKING. Clay doesn't say that actually—though as life coaching, it's a little less obvious, and at least as useful.

Well, I have news for the makers of The Words. By many measures, Hemingway did indeed Really Live. But when it came to his art, he also worked at it-obsessively, as real writers do. "I write one page of masterpiece to ninety-one pages of shit," he said once. "I try to put the shit in the wastebasket."

Now THERE's some good writing advice: put the shit in the wastebasket.

But then, Hemingway was a novelist, not a screenwriter. And like I said, there's a difference.