close
Love in the time of carnage 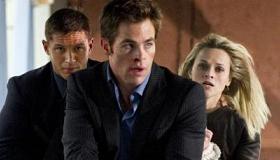 A dating fantasy for girls and an action bromance for guys, This Means War wins the Valentine date crowd in swoops and strokes, but does it lead to swoons? Not really. A deeply confused lover's triangle where sex and petting never match the high-kinetic thrusting of battle, this one has a strangely PG-13 vibe given its fascination with violence and neutered sex appeal. But just as the men in this film vacillate between horrible and endearing, you'll find yourself (whether male or female) being lost and won back by the film's charms, chiefly its cast. Friendships are fierce and love is foreign, but War's simple set-up is engaging even when the soldiers break all the rules. Box office should be swift but the film might not stay in the audience's warm embraces past St. Patrick's Day.

Tuck (Tom Hardy) and FDR (Chris Pine) are highly competent CIA field agents. Not quite an odd couple, Tuck loves but lost his family to an undisclosed "mistake," and FDR is a ladies man so drunk on his own swagger he practically staggers. Theirs is a marriage in the field, and when they double-team to take down the minions of mysterious criminal "Heinrick" (Til Schweiger), they're like the Fred and Ginger of fisticuffs. Meanwhile, Lauren (Reese Witherspoon) is comfortable with her single status. She's not the manically careerist relationship-phobe of the usual rom com, but it still takes her friend Trish (Chelsea Handler, spewing faux-feminism like it's bile) and the force of an embarrassing online dating scheme to push her into the field. Lauren tests skillets, windows and blenders for a high-end consumer services company and wields flamethrowers and power tools with glee-she's as driven about her job as the boys are about theirs.

The love triangle starts when Lauren goes on a great date with Tuck only to happen upon FDR in a nearby video store (nostalgic much?) as he waits for his buddy to get through with his cocktails. Unknowingly, FDR muscles in on his best friends crush, urged on by her eagerness to reject him. And so the boys compete compete for her heart using the all the spy skills at their disposal, which is alternatingly repellent (as when FDR spits out art history fed to him in by an earpiece) and horrifying (as when Tuck detonates a paint bomb in a cabin of cowering children to proof he's man enough for her). Naturally, the competition overwhelms their good sense, but the more boys deceive Lauren for the goal of winning her hand, their seeming disinterest in the actual prize gets a little creepy—though, I suppose, that's the price of admission.

McG (Charlie's Angels, Terminator Salvation) has a knack for action and an increasing comfort with comedy, but the rest of his skills are hard to gauge. Unlike the crass faux-feminism of Charlie's Angels, here it's the men who take the brunt of objectification—sure, it's still objectification, but at least in a context that might please women and prove inoffensive to men as long as these CIA sex-objects look cool throwing a punch. He overuses good things in a way only forgivable on TV (how many times can you play The Beastie Boys "Sabotage?") and struggles with pacing. The best scene in the film is a steadicam sequence that finds and loses the boys as they do recon in Lauren's home without the others knowing, but it can't sustain its own energy. Even the quiet scenes feel like they're on full blast. And all the while, completely facile and pointless film references are sandwiched in as if to meet an imaginary quota. But, like Tuck and FDR, This Means War is as charming as it is wrong-headed, and it somehow still wins you over. Weren't it for wiles like theirs, our species would end. Mating: damned if you do, damned if you don't.