close
One of best sports docs of the last 25 years 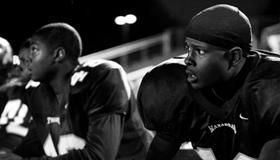 In the first quarter of Undefeated, Daniel Lindsay and T.J. Martin's transcendent documentary, Manassas High School football coach Bill Courtney paraphrases Heywood Hale Broun's famous quote, "Sports do not build character. They reveal it." To Courtney, behavior on and off the field comes down to that rare and essential quality, something he tries mightily to instill in his poverty-stricken North Memphis charges. For those now recoiling at the thought of another inspirational, underdog sports documentary, lay your fears aside. While the film may chart an ostensibly predictable course as an underfunded minority team finds itself playing in the Big Game, football is ultimately just the conduit allowing Lindsay and Martin to explore socio-economic and behavioral matters in a fashion both moving and inspiring. It's a stirring mix of sports and human drama that exudes an almost earthy sense of genuineness. Normally, an effort this good would be completely ignored by the clueless members of the documentary branch of the Academy. This year, however, possibly to make amends for overlooking Steve James's similarly-themed 1994 Hoop Dreams, Undefeated earned a Best Documentary Oscar nomination. Awards recognition should only boost the coffers of a doc that features echoes of the popular, based-on-a-true-story gridiron movies The Blind Side and Friday Night Lights.

As there's no dearth of high school football in America, the filmmakers surely hoped that Courtney and his Tigers would provide enough interesting storylines, rich characters and trenchant insights to justify the nine months spent living in Tennessee witnessing their personal and academic travails. Let it be said they needn't have worried: Coach Bill and his 2009 Manassas Tigers are worthy subjects. And what they are at the start of the film is "arguably one of the worst programs in the entire state." Ever insightful, Coach Bill pushes the overarching message that their play on the field is the byproduct of who they are off the field. None of the players have two parents who graduated college. All of them have a parent who has served time in jail. The Manassas football program is so strapped for cash that for a few thousand dollars, they can be hired to play a competitive high school team that needs the practice. To be successful, these kids need to somehow put all that aside and, as Coach Bill says, "man up."

Courtney became the team's volunteer coach six years earlier. Pot bellied with unkempt waves of sandy hair sprouting from under his cap, the charismatic Courtney proselytizes honor, character and putting the team above the individual. He is forceful and direct in his mentoring and a good enough coach that the Tigers might achieve the impossible: win a playoff game for the first time in the school's 110-year history. Such a shocking turn of fortune would be partly attributable to left tackle O.C. Brown, one of three Tiger players on which the doc focuses. The gentle, hulking Brown is on track for college if only he'd improve his grades. So he moves in with one of the team's white assistant coaches (there's your echo of The Blind Side), who lives in an affluent area far removed from North Memphis, where the closing of a Firestone plant in the '80s doomed the neighborhood. There's also Montrail "Money" Brown, an offensive lineman and excellent student whose family has never left North Memphis. ("Even if I don't make it out of Tennessee," he says, "I'm gonna make it out of Memphis.") The most riveting player, by virtue of his unpredictability and surprising arc, is Chavis Daniels, a linebacker with anger issues so acute that when we first meet him, he's rejoining the team after serving 15 months in a juvenile penitentiary.

Despite appearances, Lindsay and Martin's film is not one for exploitation, nor does it traffic in racial clichés or stoke any racial flames. From a technical standpoint, their approach is fairly clinical. The film is strenuously non-melodramatic, the editing is tight and the camerawork is steady. That's not to say Undefeated is a cold work. On the contrary, we become so emotionally invested in the team that when Coach Bill delivers his intimate, devastatingly heartfelt final goodbye to O.C. Brown, tears are guaranteed and well-earned. As Chavis and "Money" deal with their own problems during the course of the film, we don't even notice that Undefeated is yet another story about a white man coming to the rescue of African-Americans. In fact, to disparage the film on that basis would be profoundly disrespectful to what Coach Bill, his team and this documentary accomplish. With their artful shots of North Memphis squalor, Lindsay and Martin show us a little-seen world where parentless teens are stranded in a hopeless environment. For most, their only way out is college, a possibility that their education and home life render fairly remote. That's why Coach Bill's teachings are remarkable. X's and O's aside, Bill Courtney didn't help these kids as much as he gave them the tools to help themselves.