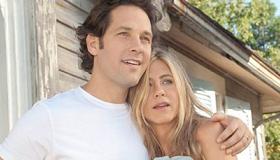 Financially, Wanderlust will fare just fine, buoyed both by Aniston's very real (and earned) star power and by the goodwill it earns by being a resolutely ‘R' comedy in a mild February of milder releases. And if director and co-writer David Wain were not the man behind Role Models, one of the funniest studio comedies of the past 10 years, perhaps I wouldn't feel as disappointed by Wanderlust as I do. But while Role Models mined riches even in the well-plowed comedic soil of cretins befriending kids, Wanderlust's equally musty city-vs-country culture clash plot finds only flecks of hilarity in mostly bland-to-bold mediocrity.

Harried urbanites Aniston and Rudd, both smacked with bad professional news, take a bath on their just-purchased Manhattan "microloft" and, after a brief stay with Rudd's jerky older sibling Ken Marino (co-writer, with Wain), wind up at a Georgia commune called Elysium. But it's not a commune, explains tribal elder Justin Theroux—that word suggests a bunch of hippies smoking weed and playing guitar—as behind Theroux, Wain and cinematographer Michael Bonvillian capture exactly that in soft, hazy deep focus.

As Rudd and Aniston enter the commun-uh, "intentional living community"—they find a menagerie of meanderers played by an ace comedic cast: Joe Lo Truglio, Lauren Ambrose, Alan Alda, Malin Akerman, Kerry Kinney-Silver, Jordan Peele and the always-game Kathryn Hahn. For a while, it's dope and fun and sex (the community has "open sexual boundaries"). Then comes feuding and the whole experience, of course, teaches Rudd and Aniston what really matters. There's also a finale that is a grab-bag of easy outs for tired writers: three separate incidences of wish-fulfillment, plus two deus ex machinas, all wrapped up in a fake news report.

But when Rudd gazes into a mirror and tries to psych himself into infidelity, he riffs and rips awkward seduction talk with utter shamelessness. And though Aniston is renowned for her toned physique and flowing locks, she again demonstrates that she deserves more credit for her perfectly-toned comedic timing and the flow to play with some of the greatest improvisers in comedy. The only thing more tiresome than hippies is making fun of hippies, but her drug-induced freakout is spectacularly filmed and paralytically funny. Theroux's character—as necessary to the tired land-development feud subplot as the serpent was to Genesis—lets him ham it up, and he totally scores.

There's plenty of male nudity (I had always found Joe Lo Truglio a gifted comedic actor, but now that phrase takes on a whole new meaning) but the film's vibe could have used a little more indie or European-style smarts about eroticism and fidelity and a little less of American approach to sex in comedy, which is mostly to titter, point, and run away. (A moment of Aniston, lolling aglow in bed with two other women groaning to Rudd "You just missed it ..." appears in the trailer, but not the film.) The titular irony is that Role Models, for Wain, proves hard to live up to, and while Wanderlust is funny, it also meanders.