close
I'd take a bullet for this movie 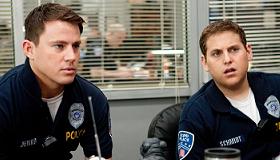 Jonah Hill is masterful at delivering absurd stories with so much sweetness, the nonsense can't even get in the way. If you loved Superbad and even remotely tolerated the original undercover-cops-in-high-school plot of TV's 21 Jump Street, this could be your new favorite movie. It moves at the speed of trailers, both in terms of story and character (its warmest bonding moment happens in a shootout) but Jump Street's unrealistic speed is maintained throughout—even as Hill and costar/superstar Channing Tatum make no progress on their case compared to the other CSI-style geniuses on their squad. Its remake origins mean it can't become a classic, but if it doesn't strike box office gold there's no sense in the world.

The original show was a springboard for Johnny Depp, but not so much for the rest of his costars (though here, Holly Robinson makes a thrilling cameo and Dustin Nguyen is seen on TV in the background of a gunfight). The show's strength came from its seriousness towards its silly premise. The cops were seasoned but young-looking and got more emotionally involved with their cases and their crooks than protocol allowed. That happens here too, but with more winking and nudging.

Hill and Tatum are rookies with one hilariously incompetent bust under their belts when Nick Offerman (petting his bulldog desk mascot) tells them the 21 Jump Street program was revived because the people in charge aren't very imaginative (wink, wink). So they meet Steven Williams surrogate Ice Cube, who tows all the same lines as Captain Adam Fuller but says them like a graduate of Boyz n The Hood—because he is. In school, they find the cool kids are A-students and the drug dealers they're there to stop ("it's killing white kids, so people care") are responsible suck-ups who've earned privileges like yearbook class access.

Hill and Tatum swap roles: Hill bonds with the eco-conscious, socially tolerant rich kids at the top of the food chain and Tatum learns the geeks are the only kids who understand ridicule and how to blow things up. (They blame the lack of social stratas on Glee.) But what both guys suffer from most is a general sense they're behind the times. It's only been seven years since they both missed their senior proms (for different reasons, though they cried the same tears) and now that they have a second chance at doing high school right, they can hardly figure out which end is up—especially in this brave new world of texting, tweeting, Facebook and YouTube.

This picture is accessible to so many crowds (fans of the old show, fans of the stars, fans of everything spoofed or referenced throughout) it's like a giant social skeleton key. Even though 21 Jump Street mocks Glee, it also follows its lead: Glee unifies, while Jump Street says, "You don't get our new hip tolerance? Don't worry buddy, there's still a lot in it for you."

The direction by Phil Lord and Chris Miller (of Cloudy With a Chance of Meatballs) doesn't look like the product of too many cooks. The unity of ideas and focus are clear throughout and the script by Hill and Michael Bacall proves how full bodied it is by playing off high school realities to build a world of playful layers--a chase scene in a commandeered Student Driver car is freaking fantastic, and a calamitous school production of Peter Pan cutely drills home the point that Pan's name-checked complex is half the joy of the Jump Street premise. Are these cops adults who want to be kids or do they just look that way? For a film about adolescents, it's stunningly self-realized and once Hill and Tatum get past that "know thyself" stage, it's a whole lot of "I'm a bada**!" And the conclusion to all that is—yes, they are, and congratulations on your first kind-of accidental maiming. It is, after all, a rite of passage.