close
The Tree of Lame 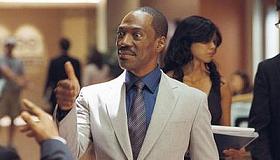 Eddie Murphy plays a fast-talking literary agent with a specialty in convincing Eskimos he has the best snow. So when he coerces a reluctant Deepak Chopra-type guru (Cliff Curtis) to sign a publishing contract with his company, the universe gives Murphy a tree that loses one leaf for every word he says—and if it loses all of them, he dies. While A Thousand Words features some reverent flashes and even has the potential to touch audiences (a moment involving a mother with Alzheimer's particularly hits home), it suffers from being too broad. Can you burlesque Eastern mysticism? Does the world really want The Love Guru 2 with a fresh family message? In case not, Thousand Words shoves in jokes about everything from nitpicking bosses to furries (if you're not aware of the latter, you're better off not learning it from the comedian who made Raw.) While films like Jumping the Broom and the forthcoming Woman Thou Art Loosed: The 7th Day, angle for the black Christian male audience, this film looks to reach a more secular brand of black family man. He's out there, but I doubt his humor is this juvenile, so word of mouth on this may inspire audiences to make like a tree and...

Jack McCall (Murphy) is a negotiator, winner and selfish jerk. He berates his assistant and dances around his valet's questions about a manuscript. Even his wife gets the short straw, changing their son's diapers on a bar because they still live in his bachelor pad. He's a taker, not a giver, but his poor personal philosophies have rewarded him. And so the universe awaits its chance for punishment: planting a tree in his backyard as a moral test of his worth. This tree's a surrogate for McCall—if he takes an axe to it, he's the one who shows a mark. At first, the lesson to learn is unintelligible, particularly as his inability to talk turns him into a blank slate for everyone else's insecurities. But then we uncover the real roots of the problem: McCall's mad about his father abandoning him. Can he stop himself from replaying that old record, even with his mother absently calling him by his father's name?

It all looks very stressful. Outside of a few jokes that can't help tickling an editor ("dickhead is one word!") and the pleasure of seeing Murphy step up his game in charades, it's all more exhausting than funny. I'm glad the tree accepts Pictionary as communication but its involvement in the film only highlights the movie's general lack of creative imagery. A sequence in which Murphy "communes" with his inner child looks like a Hallmark condolence card from the late '70s and every emotional moment is almost completely accomplished through background music-mind-numbingly appropriate, I guess, for a film whose message is, "Actions speak louder than words."

The problem with A Thousand Words—and the whole Eat, Pray, Love genre of mass marketing spiritualism—is that it can't convey internal vs. eternal life. Terrence Malick regularly gives philosophy a whirl, but Tree of Life was met with as many questions about egg yolks and dinosaurs than about the real substance he tried to unearth. Can the life of the spirit be explored while we eat popcorn? Deepak Chopra thinks so. But can we buy that message from the man responsible for Norbit?