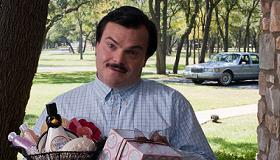 It was only a matter of time before Richard Linklater tried his hand at making a Christopher Guest movie, if only because it's only a matter of time before Richard Linklater tries his hand at any kind of movie. The restlessly creative filmmaker has always been more of an ambitious journeyman than an auteur, and Bernie—his first narrative feature since 2008's Me and Orson Welles—finds him collapsing unexplored modes into one project as if to save time. Bernie might best be described as a biopic that unfolds like a thin morality play in the guise of a dark mockumentary, and the film's biggest problem is that it struggles to illustrate its own muddled intentions any better than that. Jack Black inflects his usual shtick with an effete touch in order to play Bernie Tiede, the most beloved small-town mortician in all of East Texas, and his performance evolves with rare nuance after an uncharacteristically violent impulse makes Bernie a wanted man. Pallidly lensed by venerable cinematographer Dick Pope and relieved only by Matthew McConaughey's scene-munching performance as a local district attorney, Bernie is poised to be a tough sell for Millennium Entertainment, its mild star power likely incapable of offsetting a garish premise and mixed reviews.

Funeral Director Bernie Tiede is the kindest guy you'll ever meet, a man so generous with his time and affections that it almost seems suspicious. Bernie, defined by the thin mustache that curls along his upper lip and the gentle waddle with which he moves about town, is the joy of Carthage, Texas, involved in almost every aspect of local life. He leads the church choir, he directs and stars in the community musicals, and his closest friends are the lonely old widows he's met through the unfortunate circumstances of his work. Bernie's sexuality is a topic brought up only to be immediately dismissed—one gets the sense that homosexuality isn't readily accepted in a place like Carthage, and so the residents choose to ignore Bernie's more flamboyant behavior in order not to deprive themselves of their most beloved citizen.

Bernie's best friend is the richest widow in town, Marjorie Nugent (a criminally underused Shirley MacLaine). Marjorie might be the least pleasant person in all of Carthage—she's a bitter crone, but not bitter enough to deter Bernie from trying to bring some joy to the twilight of her life. He begins to spend a whole heap of time in her suburban mansion, where she lives in a nouveau riche Xanadu that substitutes taxidermy for wallpaper. The two become fast if unlikely friends, but as Marjorie's wealth flies them around the world, Bernie quickly becomes less of a companion than a pet. The relationship eventually becomes so suffocating that Bernie, for all of his infinite patience, succumbs to a momentary impulse that threatens to undue decades of kind actions.

Linklater has been intent on making Bernie for years, eager for another chance to tell a true Texan story, and the film's mockumentary structure allows Linklater to positively cook the movie in some deep Texan flavor. Southern-fried actors, all of whom believably pass for Carthage locals, look directly into the camera as they testify to Bernie's character, Linklater drawing thin laughs from their naiveté and mispronunciations. For the first 40-minutes or so, these faux interviews completely dominate the film, making the segments that actually feature Bernie himself feel like hollow recreations, and sapping them of their sting. Revealing Bernie's nature through his impact on the people around him is an interesting tact, but it's mercilessly overdone, a problem that's exacerbated to the point of apathy because it's all so obvious and unfunny. Bernie aims for sitcom laughs, and often falls short of even those, eschewing absurd humor and memorable characters for cheap one-liners that suggest Linklater was emulating Christopher Guest's style without quite understanding what makes it work. The whole thing comes out a bit patronizing, as audiences are implored to laugh derisively at the yokels on the other side of The Pine Curtain, and the chorus of gossipy voices tell us very little about Bernie that Black's outwardly tuned performance doesn't already belabor.

And then, just when it seems like Bernie is going to drift away into oblivion, Matthew McConaughey shows up to save the day. With his goofy charm suffused by a ruthless drive to be re-elected, his district attorney Danny Buck Davidson is the great bridge that binds all of the film's clashing flavors into an edible bit of home cooking (and, most impressively, McConaughey manages to do it all without ever taking his shirt off). Davidson's character arrives to flip the film from a dark comedy into an appreciably ambiguous morality play that asks if a person deserves to be judged for his worst moment, and if it might be in our best interests for one cruel person to suffer if it means that dozens of decent folks might thrive and collectively better the world they share.

Interesting questions, both, but Linklater's muddled approach does nothing to pose them provocatively. In fact, the film's most archly fictional constructs—its broad affectations and sickly aesthetic—are the greatest hindrance to appreciating what makes this true story worth telling, and it's difficult not to wonder why Linklater didn't just shoot the thing in the guise of a documentary, perhaps employing his marquee actors for reenactments that might play with the audience's sympathies in a way meaningful to this fascinating episode of American justice. As it stands, Bernie is an interesting guy, but he doesn't make for very good company.