close
Taking the fight to bullies 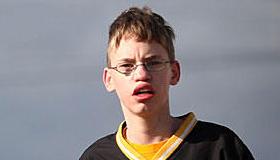 More of an aggrieved cry for help than a detail-oriented call to arms, Bully addresses the issue of adolescent torment not through statistical analysis or activist agitation but, rather, through the heartrending stories of children suffering from the abuse of their peers. Lee Hirsch's documentary assumes a familiar and somewhat frustrating structure, splitting its focus between a number of different kids from neighborhoods in Georgia, Oklahoma and Mississippi to capture the universal feelings of loneliness, low self-esteem, shame and desolation that plague kids who, because they are different, are subjected to physical, verbal and emotional cruelty. While the director's subjects (covering a fairly comprehensive racial-gender spectrum) are more diverse than their strikingly similar rural communities—at least one portrait from an urban area would have further broadened the film's scope—his overarching panorama of young and adult misery is affecting, even when he fails to provide the requisite depth that might have allowed the doc to truly leave a lasting impression. Bolstered by poignant and relevant subject matter, as well as The Weinstein Company's recent, highly publicized battle with the MPAA over its rating (it will hit theaters unrated), it's a non-fiction effort poised to make significant mainstream box office inroads.

Hirsch opens with the grieving parents of Tyler Long, who at age seventeen hung himself in his bedroom closet after years of being harassed by classmates. Although his story is one of Bully's two that ended in death, it's emblematic of the many tales that comprise the film, which is consumed by the sadness of parents wracked with regret over not having known the severity of their child's problems, and fury at schools that—like the indifferent parents of the bullies and the generally disinterested police—ignore these problems until it's too late. According to Hirsch, adults' desire to chalk up bullying to just "kids being kids" is the real failing of public schools, whose culpability for not properly addressing the issue is infuriatingly encapsulated by the sight of a middle school assistant principal unfairly and disgustingly chastising a bullied kid for not shaking hands and making up with his persecutor. Concerned parents and citizens attempt to combat such lack of effort via town hall meetings and public rallies, but through the plights of these kids—which also include 16-year-old lesbian Kelby and 14-year-old Ja'meya, incarcerated for threatening school bus bullies with her mom's gun—Bully argues that true change can only come from heightened awareness of, and proactive efforts to seriously confront, the issue from school administrators, teachers and community leaders.

Graceful cinematography captures the loneliness and isolation of these kids with understatement, even when the director succumbs to twinkling piano that pulls a tad too hard on the heartstrings, and happy-toddler home movie footage that borders on the manipulative. More frustrating, however, is the superficiality that ultimately comes to define almost all of Bully's teenage snapshots. Hirsch's compassion is palpable, but by continually switching back and forth between his various subjects, he drains their stories of substance—family dynamics, difficult upbringings and personal and parental transformations brought about by bullying (as with Kelby's father, who claims to have had his worldview altered by his child's experiences) are all addressed with a cursory fleetness that leaves the material to operate at a skin-deep level. Even so, with the sight of 14-year-old Alex being beaten and stabbed aboard a school bus, and his subsequent admission to his slow-to-react parents that "I'm starting to think I don't feel anything anymore," the film strikes at the heart of bullying as a vehicle not for thick skin-generating maturation but for serious, and potentially long-term, trauma.