close
Is Will Ferrell the next Meryl Streep? Es posible. 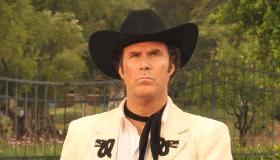 Will Ferrell tiene cojones grandes. Though he stopped studying Spanish after two semesters in college and let his skills slide to where he could barely order a taco, the blue-eyed, curly-haired gringo ultimo has now shot a film entirely in español. And decent Spanish at that, even if he didn't actually understand what his language coach was making him say. Is the result—a slapstick, bizarro melodrama where Ferrell plays the Mexican born and bred scion of a wealthy farmer—meant more for Spanish speakers or stoned and giggly Americans? It's a tough call but a brave move (in Arizona, you could be deported for less) and though it's as messy as a plate of huevos rancheros, it deserves applause for being the first semi-mainstream movie since Adam Sandler's disastrous Spanglish to recognize that we've become a country as familiar with chipotle as we are with cheddar cheese. Not that Casa de mi Padre will make much cheddar—it's designed to be watched at home with a Taco Bell 12-pack.

If Casa de mi Padre is a stunt, it's a stunt that has the full support of the Mexican film industry, which lent two of its top actors—Diego Luna and Gael Garcia Bernal—to the project. Of course, they both play drug dealers. The choice to center the story on the violent cartel struggle to control the bordertown land owned by Armando (Ferrell) and his papa Miguel's (crossover Mexican star Pedro Armendariz Jr.) leaves me conflicted: the drug war is the only news Americans hear about Mexico, but on the other hand, at least the plot isn't Armando falling in love with his burro. By contrast, Armando is so pure he's never been with a woman, especially not one like the stunningly sexy gangster moll (Genesis Rodriguez of Man on a Ledge) his feckless brother Raul (Luna) brings home in his tricked-out SUV. Sonia is such a vixen, the maids whisper behind her back and her own creepy uncle (Garcia Bernal) wants to marry her himself.

Sound like a ridiculous Mexican soap opera? That's the point. But while we roll our eyes at telenovelas, it'd be the stuff of serious drama if you relocated it to Downton Abbey, ie the Guinness World Record holder for "most critically acclaimed English-language television show," which is really just a telenovela classed up with British accents. Call it a tellynovela. Somehow, the production budget of Casa de mi Padre was $6 million, which is impossible to understand as it mocks the cheapie quality of Mexican soap operas with obviously fake backdrops and horses and scenery. It's surrealist, elbow-to-the-ribs humor, even if it's not exactly true—telenovelas are such a million dollar industry that last year, Telemundo gambled $10 million on its latest La Reina del Sur. For that kind of money, Danny Boyle could have made Trainspotting four times. And as proof that Casa director Matthew Piedmont wants to capture at least a fraction of Telemundo's audience, he's littered the movie with in-jokes that only Spanish-speakers would get. The real reason why audiences are laughing at a quickie shot of a wedding singer is the guy holding the mic is José Luis Rodríguez, aka "El Puma," a '70s Venezuelan pop star who also happens to be Genesis Rodriguez's dad.

But for American audiences, the big question is: How good is Will Ferrell's Spanish? Actually, it's not bad. To his credit, he tries to nail the proper, non-gringo pronunciation, and if he still sounds a little awkward, even in normal movies Ferrell speaks English like it's a foreign language. And he fakes Spanish better than Danny Trejo, a tremendous screen presence who also mumbles some of the worst Spanish in the movies—and Trejo's had decades of Spanish-speaking characters to practice. And if you're still not convinced, comedian Nick Offerman pops up as a DEA agent blurting out Spanish so bad he sounds like a drunk frat boy trying to order a margarita in Cancun—the comparison makes Will Ferrell seem like Meryl Streep. So is Casa de mi Padre laughing with or laughing at Mexican culture? By nature, Ferrell's just so sincere that he pulls the movie off for both audiences. Imagine the angry headlines in Mexico if Rob Schneider played the lead. Cómo se dice "international crisis" en español?