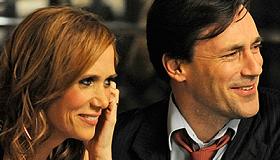 In the past decade, Jennifer Westfeldt has co-written and starred in two well-received films (Kissing Jessica Stein and Ira And Abby) and now, with Friends With Kids, she's added directing to her list of credits, so with this engaging and clever grown-up comedy, she succeeds as sort of a female Woody Allen—sans neurosis. Best friends Jason and Julie bow to pressure from their married friends and decide to have a baby together, though they plan on remaining platonic pals. With a premise this funny and original and a cast this solid (including a few recent Bridesmaids vets), it should draw upscale adult audiences looking for a sophisticated romp to rescue them from the spring cinema doldrums. Box office prospects are bright.

Jason (Adam Scott) and Julie (Westfeldt) are single, New York thirtysomethings and they've been friends since college. They're not a couple, but all their friends—Ben and Missy (Jon Hamm, Kristen Wiig) and Leslie and Alex (Maya Rudolph, Chris O' Dowd)—are. This tight-knit six-pack doubts children could change their lives but flash forward a few years and it's totally done just that: they stayed single and their friends morphed into exhausted parents who only talk about kids. A birthday celebration leads to a unique proposition and sooner than you know, this unmarried pair of "just friends" have a baby together and try the most unconventional of relationships. Julie begins dating Kurt (Edward Burns) while Jason is smitten with Broadway chorine Mary Jane (Megan Fox). But will there will be complications when emotions enter the equation and these new parents find out their family plan may not be as easy as it once seemed?

Although Westfeldt's sharp screenplay is mostly talk, it's very good talk. She has a great ear for dialogue, and though they are as far from blue collar, their hopes, dreams and problems will be instantly recognizable to anyone struggling to find love and family before the clock runs out. As a director, Westfeldt got top-notch performances from her cast, especially stand out Adam Scott, a fine actor with a breakout role that could take him to the next level; he's warm and real, pulling off a potentially tricky part.

Whether it was luck or design, Westfeldt also gathered a virtual Bridesmaids reunion with Wiig, Rudolph, Hamm and O'Dowd—but each of them plays a role wildly different from those they played in that smash last year-still they're equally terrific. Westfeldt's longtime BF, Jon Hamm, is underused but has one killer dinner table speech that's worth the price of admission.

Proving she's a true triple threat, Westfeldt has pulled off something special: entertainment for grown-ups that doesn't disappoint or dumb it down.