close
The goofiest of them all 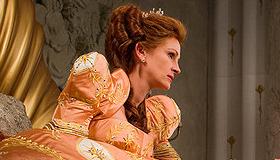 Strictly for kids, but pure movie fun nonetheless, Mirror Mirror is the fairest family entertainment of all—at least for this weekend when all the youngest kids have to look forward to is another repeated viewing of The Lorax. This often hilarious, wickedly clever slapstick take on the Snow White fairy tale is downright blessed by the presence of Julia Roberts as the Evil Queen who banishes Snow White to the forest, only to live to regret her actions. Given Roberts, the renewed popularity of storybook tale and that lack of kiddie fare, look for some nice opening weekend bounty—particularly from matinees—plus good word of mouth among the young set.

A literal gaggle of writers (credited and not credited) tackled the famous tale by returning to the original and then adding parts of various versions seen over the centuries, say how in Albania, the seven dwarfs aren't miners but thieves. And though they haven't struck gold, they're often on target, especially when the perils of Snow White aren't taking themselves too seriously—which is most of the time. The basic plot hasn't been tinkered with much: after the King (Sean Bean) disappears, the jealous queen (Julia Roberts) does away with her teenage stepdaughter Snow White (Lily Collins) by banishing her to the forest, only here it's to leave her Highness free to seduce and wed the much-younger Prince Charming (Armie Hammer). In the woods, Snow White is taken in by a merry band of rock-the-boat dwarfs and turns into a strong, courageous young woman who fights the Queen and the Queen's bumbling sidekick (Nathan Lane) for her land's honor. You'd think the Prince isn't going to sit idly by as Snow is defeated by the conniving monarch, but in fact, that's touch and go.

Roberts rules in this role. She's got a real knack for comedy and has been given a lot of great throwaway lines to quip. She also looks stunning in the outrageous costumes dreamed up by Tarsem's long-time designer Eiko Ishioka, who passed away after the film was completed. Wisely, while Roberts knows this is kids' stuff, she never talks down to the target audience. Instead, she gives the evil queen a touch of sass missing from most versions of the tale and plays nicely opposite Lane's usual sidekick patter and spot-on comic timing. Collins (daughter of singer Phil) makes an enchanting Snow, but hers is strong, contemporary and not the least bit stereotyped. Hammer is the perfect Prince and delivers his lines in suave style, particularly when at odds with Snow White. The producers relish every opportunity to get him shirtless and their attempt to turn him into a beefcake prince cheapens his characterization a bit. Disney composer Alan Menken's score smartly livens up the proceedings with some sprightly music. And though director Tarsem Singh (Immortals, The Cell) seems an odd choice, he actually brings a bit of edge to the flick—that is when not letting it all lapse into slapstick.