close
Things that go yawn in the night 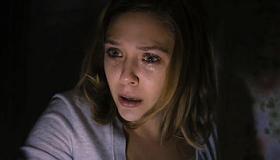 An American remake of the Uruguayan horror film La casa muda, Chris Kentis and Laura Lau's Silent House shares both the same plot and that film's strict storytelling conceit of unfolding in real time. Shot in just one take (or, at least, looking authentically like it was—there's at least one very obvious point in the film where it could have easily been cut), the Sundance flick centers on last Sundance's up-and-coming star Elizabeth Olsen as Sarah, a girl working alongside her father and uncle to restore and resell their damaged and all-but-deserted lake house. There's a lot of work to do: all of the windows have been broken and subsequently covered with plywood, making the house pitch black even in the middle of the day and making it the perfect setting for thrills and chills. Separated from her father and uncle, Sarah finds herself trapped inside by a lurking man clearly up to no good, and thus begins a standard home invasion thriller with an equally standard third act twist. With no other horror films in theaters to challenge it, Silent House will appeal to teenage moviegoers looking for something scary to pass the time—it should make more than enough money to cover its cheap budget.

Silent House is undeniably built on its "one-shot, real-time" gimmick. And while it works reasonably well—especially in the first half of the film—it's still just a gimmick trying to gussy up a common horror flick. Technically speaking, the conceit fails as often as it compels. Not only is the camerawork overly shaky, but the the fun (and scary) use of limited light is undoubtedly inspired by the Hitchcock classic Rear Window, just as the real-time hook was cribbed from the Hitchcock classic Rope. Why remind us of the better films we'd rather be watching? Still, the horror genre is good for gimmicks. We can thank it for the resurgence of 3D and the prevalence of the found-footage shtick—neither necessarily bad things—and Silent House's one-take conceit will likely go on pop up in other films where it'll prove to be both more successful and more in service to the plot.

Much of your enjoyment of Silent House will hinge on how appealing you find lead Elizabeth Olsen and if you're willing to watch her (and her alone) for 90 percent of a film. Silent House was one of two films Olsen starred in at last year's Sundance, including her breakthrough role in the wonderful Martha Marcy May Marlene, and she's damn lucky that she has that performance to hang her hat on. If Silent House was her only Sundance role from 2011, she'd have garnered little attention for her acting skills, which directors Kentis and Lau limit exclusively to crying, screaming, running, and hiding.

Unfortunately, in the last reel when Silent House gets down to the business of tying up all it loose ends, its very marketable gimmick is reduced to nothing more than a bait and switch. Audiences will likely be split over the film's "big reveal," with some mistaking it as clever and inventive, and others insulted by how disingenuous it is to everything that happened previous. It's one thing to build a twist into a film—it's another thing entirely when that "twist" is ham-fistedly hinted at throughout the entire production without even adding much interest to a run-of-the-mill thriller. Silent House's change-up from home invasion scarefest to limp psychological terror is bad, but worse yet, it's boring.