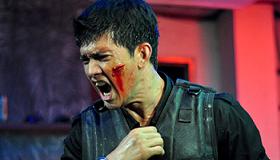 An orgiastic barrage of violence, The Raid: Redemption is, at least in its finest moments, one of the most breathless, blistering action movies in recent memory. Gareth Huw Evans' take-no-prisoners film hails from Indonesia but, in style and attitude, it's akin to a Hollywood blockbuster uninhibited by propriety or restraint; it prizes inventive combat choreography above star wattage, and so feels reminiscent of another fierce overseas import, District B:13. The saga of a SWAT team that finds itself in dire circumstances when its raid on an apartment complex run by urban kingpin Tama (Ray Sahetapy) turns ugly, it's a work that has no interest in subtlety, a tack that extends to graphic mayhem straddling (sometimes uncomfortably) the line between gonzo gleefulness and sadism. Few modern actioners have delivered set pieces with anything approaching the ferocity of The Raid's signature moments, which culminate with a two-on-one skirmish of such prolonged choreographic excellence that it overshadows not just everything that came before it, but virtually every other martial arts movie since the heyday of Jackie Chan and Jet Li. Already buoyed by festival buzz, it's sure to be received with enthusiasm by genre devotees, and word of mouth has the potential to turn it into a bona fide box office sleeper.

A prologue in which agent Rama (Iko Uwais) alternates between praying and training at dawn while his pregnant wife sleeps—as well as a brief intro of Tama exhibiting his capacity for murder-by-hammer—is all the character set-up needed, as Evans segues quickly into the story proper, in which Rama and his mates make their way to Tama's fortified slum abode, a high-rise populated by all manner of miscreants. Scored to menacing electronic beats courtesy of Joseph Trapanese and Linkin Park's Mike Shinoda, it's a mission that pits few against many, and has little interest in motivational nuance or surprise, though Evans' plot does eventually turn on a revelation that requires more suspension of disbelief than the film can sustain. Still, that twist's implausibility proves less frustrating than it should because of the sheer intensity of The Raid's guns-and-fists craziness, which truly kicks into gear with Rama slaughtering a horde of attackers in a hallway while attempting to protect an injured partner, the hero slashing thighs, kneecaps and throats with whirligig dexterity and cruelty. Evans' fondness for over-the-top close-ups of guns blasting craniums and chests being stabbed often pushes the material into more juvenile gore-is-great territory, but it also creates a sense of anything-goes cartoonishness, generating tension and excitement from a refusal to conform to expectations about moderation and decency.

Although The Raid's story is a two-dimensional beast in which Rama and his rapidly dwindling number of commando comrades blast their way to Tama while learning about their mission's true, shady origins, its staging is more three-dimensional than most glasses-required event films. Evans' camera whips and glides about during melees with a razor-sharpness that keeps momentum at a frenzy as well as—amazingly—delivers consistently lucid portraits of the actual battles at hand, so that despite the action's hyperactivity, spatial coherence and clarity are always maintained. There's no denying that Evans is, ultimately, concerned only with generating some Wow Factor, but whether it's the sight of Rama leaping to impale a man's throat on the jagged bottom of a shattered door, or the hero using a grenade, gas tank and refrigerator as a homemade projectile bomb to clear a hallway, The Raid delivers on its promise of unbridled testosterone-fueled insanity. That's most true with its final fight involving Rama and Tama's two main henchman, Andi (Doni Alamsyah) and Mad Dog (Yayan Ruhian), a sequence of hand-to-hand combat executed with such amazing, extended creativity—especially with regards to videogame-grade, gravity-defying maneuvers—that, even in defeat, its out-manned villain comes off like a winner.