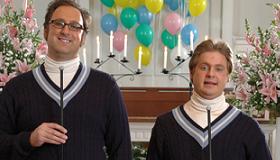 There are so many formulaic atrocities about new beginnings, failed ambitions and lessons learned that it's tough to tell when a film is making fun of those "fresh start" conventions or just duplicating them—especially when the picture is guilty of stilted execution and bad technique. But there's something more going on in Tim Heidecker and Eric Wareheim's first film—well, more than nonsense storytelling, scatological humor and questionably competent filmmaking. A shrewdly understated satire of feel-good dramas disguised as gross-out inside jokes, Tim & Eric's Billion Dollar Movie should alternately leave some viewers in stitches while making others quickly leave the theater, earning it only modest returns on the silver screen but ensuring Heidecker and Wareheim's legend survives—and expands—on home-viewing platforms.

Wareheim and Heidecker play "themselves," a pair of Hollywood actors who squandered a billion dollars of the Schlaang Corporation's money on three usable minutes of footage featuring a Johnny Depp impersonator wearing a suit made of diamonds. When CEO Tommy Schlaang (Robert Loggia) demands his money back, Tim and Eric skip town for the Swallow Valley, where a shady businessman named Damien Weebs (Will Ferrell) coincidentally offered the first person (or in this case, persons) he can find a cool billion to run the mall he owns. Inspired by the chance to create a new identity for themselves, Tim and Eric recruit Weebs' ailing "son" Taquito (John C. Reilly) and begin refurbishing the mall. But when Tim starts to feel threatened by Eric's interest in local businesswoman Katie (Twink Caplan), he starts building a rift between them that threatens to undermine the pair's new beginning, even as Schlaang and his henchmen quickly close in on their whereabouts.

It's important to note first that whether it's a stupid comedy or a brilliant metatexual comment, Tim & Eric's Billion Dollar Movie is not for everyone. Beyond even the subjective appeal of different styles of comedy, Tim and Eric occupy a niche that embodies "you either get it or you don't:" their material pays tribute to bad acting almost as much as it makes fun of it, and their style as comedians and writers draws upon the comic awkwardness of cable-access incompetence, not to mention the enduring appeal of a good, left-field non sequitur. Consequently, it's easy to mistake calculated awfulness for the real thing, which is why it took two viewings for even a longtime Tim & Eric fan like yours truly to appreciate it: what the duo is doing here amounts to more than six episodes of their 15-minute Adult Swim show strung together. Not to be confused with the "funcomfortable" style of Curb Your Enthusiasm, et al, their humor is silly, stupid and broad in an abstract way that isn't trying to mimic real life, but conjure a cartoonish impersonation of "acting" filtered through the Video Toaster primitiveness of local television programming.

What's really interesting about Billion Dollar Movie, however, is the way it satirizes the ongoing deluge of feel-good movies released about characters making dramatic changes in their life-seeking new ambitions, undertaking new challenges, assuming responsibilities they never faced before. (The most immediate point of comparison is We Bought a Zoo, although technically most of Cameron Crowe's movies from the past two decades would fit the bill.) The two idiots at the center of this film literally abandon their responsibilities as filmmakers and depart for the obscurity of a small town where they can start fresh and rebuild themselves, even though they acknowledge several times they're "Hollywood actors" who know absolutely nothing about business whatsoever. The blind faith with which they leap into running the mall is emblematic of a kind of wish-fulfillment that's both inspiring and irresponsible, and this film indulges the former but exposes the latter, especially when it cops out and provides Tim and Eric a macabre but technically "happy" ending.

That said, the arrogance and indifference with which Tim and Eric undertake the challenge of reviving the mall is far from avant-garde; cinema history is littered with self-important dolts biting off more than they can chew, and as writers, directors and actors the duo create a pair of lead characters that you hate to love. Where they flourish is in moments of hyperbole, such as when Tim meets Jeffrey (Noah Spencer), the son of a "used toilet paper" purveyor named Reggie (Matt O'Toole), and doesn't just agree to supervise the boy, but literally bullies Reggie into letting Jeffrey become his own son. The moment is shockingly impudent, but the discomfort comes from how far Heidecker's willing to go-past propriety, or even realism—as he curries favor with the son while denigrating dad. Amazingly, that's not the film's most offensive behavior (not by a long shot), but the fact that we never stop being entertained by Tim and Eric (to say nothing of sympathizing with them) is a quiet triumph.

Given the unpredictable and seemingly pointless nature of so many of their small-screen gags, it's easy to write off their first feature effort as a puerile, nonsensical comedy with nothing deeper to say. And honestly, after the "Shrim" scene that occurs halfway through the film, nonfans who survive the whole thing should probably be awarded an achievement medal of some kind. But in an era in which personal responsibility consistently takes second place to a sense of entitlement, and ambition often amounts to "doing what I want, whenever I want," Tim & Eric's Billion Dollar Movie offers an unexpectedly understated rejoinder to the idea that in life, much less at the movies, it's realistic to think you can accomplish anything without confronting the harsh realities of your own limitations. Then again, some critics might argue that the film itself is a case study in exactly that lesson, but given how funny and surprising (and surprisingly smart) the end result is, it still manages to be a compliment to call Billion Dollar Movie the exception that proves the rule.