close
A fourth slice? Fine by me 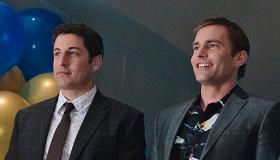 With three previous theatrical installments—plus four direct-to-DVD iterations—the American Pie franchise hasn't been dormant, but neither has it been true to its roots. Until now. American Reunion reunites the original cast of the 1999 teen gem about a group of high school seniors with nothing more on their minds than sex. The result is the best slice of Pie yet: a savvy sequel that's flat-out hilarious raunchy fun. Universal's feat in gathering up the entire gang—just as they did when reviving their Fast And The Furious franchise—is the perfect recipe for another win at the box office. Fans of the original should flock to check out this first theatrical follow-up since 2003's American Wedding, and there's even room for a new generation of teens charged up by the video spinoffs.

What made the original Pie so appealing is still what works now: a likeable cast that hasn't lost a beat. And writer/directors Jon Hurwitz and Hayden Schlossberg (Harold And Kumar Escape From Guantanamo Bay) know exactly what to do with them—a base layer of sex comedy topped with some serious grown-up relationship problems, then stir in a little schmaltz and a lot of pure unfiltered fun—to take the franchise to new creative heights. The premise is simple. The Pie crowd reunite at their East Great Falls High School 13-year reunion, but the bulk of the script is there simply to set up the gags, each more grossly hilarious than the next. Of course, as nearly every variation of T&A and bodily function jokes has been already exhausted in the previous installments, for a laugh, star Jason Biggs even goes the full monty.

Each of the characters comes to this reunion as full-fledged adults just the other side of 30—and now there's more on their mind than just getting laid. Jim (Biggs) is married to Michelle (Alyson Hannigan), and the two have a precocious child and a union that has fallen into a deep sexual slump. Kevin (Thomas Ian Nicholas) and Vicky (Tara Reid) are still splitsville and eager to look like they've moved on while Oz (Chris Klein) has become a plastic-slick TV sportscaster, most famous for his appearance on a tacky celebrity dance competition show. After a falling-out with Heather, (Mena Suvari), his new girlfriend is a super-sexy model (Katrina Bowden). Finch (Eddie Kaye Thomas) is still searching for the meaning of (his) life-after all these years, could it be Stifler's mom (the riotous Jennifer Coolidge)—Steve Stifler (Seann William Scott), the king of their high school class, is well, still the Stifler we know, love and regret inviting anywhere public, though now he's stuck in a thankless desk job with a horrific boss. Of course no Pie would be complete without Jim's Dad, played flawlessly by Eugene Levy, who here is mourning the loss of his wife three years ago, though his son urges him to face life again. Also back are several other cast members including Shannon Elizabeth's Nadia, Natasha Lyonne's Jessica and the very funny John Cho.

Some of the gags don't always land, but the surprise is most of them do—many at the expense of a very game Biggs who spends the film's third act in a kinky leather outfit. Brownie points for comic courage. But it's Scott who stands out once again—his Stifler is a uniquely memorable screen creation. But he's not coming to any of my parties.