close
Give this doc a round of bananas 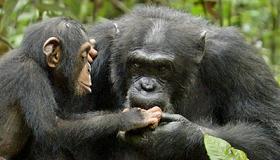 The fourth in the Disneynature series of documentaries is every bit up to the quality levels of Earth, Oceans and African Cats—each a tribute to the classic nature docs that Walt Disney served up regularly in the '50s and '60s. Kids should especially like this magnificent and heartwarming look at the life of young Oscar, a 3-year-old chimp who tries to thrive and survive among a group of older chimps. Although the script is aimed at the youngest members of the audience, adults will find much to admire in the simply astonishing footage gathered over four years in tracking this amazing species. Box office should be in line with the modest, but profitable returns of the rest of the series with a healthy afterlife on home-viewing platforms.

Filmmaker Alastair Fothergill—best known for such landmark works as Blue Planet and Planet Earth—joins his colleague Mark Linfield in collecting this fascinating and funny peek into the hierarchy and lifestyles of chimps. Tim Allen narrates their unique universe, and if the dialogue is somewhat contrived, it keeps the flow going for kids whose attention might otherwise wander. The big conflict comes in setting up two distinct bands of rival chimps, with the "bad guys" led by a chimp named Scar who rallies his menacing bunch to guard their territory better than Fort Knox—and who want to overtake the land that feeds Oscar and his family. Like last year's surprisingly grim African Cats, parents should be warned that its G rating doesn't alert you to story details that might be too much for younger kids, particularly here when Oscar's mother leaves him to fend for himself. Though it's tastefully handled, kids could find this story point disturbing—especially as until then the "plot" developed by the directors is fairly innocuous and amusing.

The filmmakers had to comb through hundreds of hours of footage in order to assemble this tight 78-minute film into something coherent, and they gain a lot of mileage from the mischievous and playful nature of these monkeys. Their best sequence feeds off the frustration of seeing Oscar trying to learn how to crack a nut. Although you wouldn't think there'd be much to it, Fothergill and Linfeld's patience wins a comic payoff from his numerous nut-cracking attempts—it alone is worth the price of admission and will delight kids. The real triumph here, though, is capturing the budding relationship between Oscar and an older male chimp named Freddie who reluctantly teaches the kid how to hunt for ants. These sequences give the film true gravitas, and even the filmmakers themselves were stunned at the turn of events that enabled them to capture their bond in such detail. In short, Disneynature's annual Earth Day gift to the planet—and the theater—has done it again.