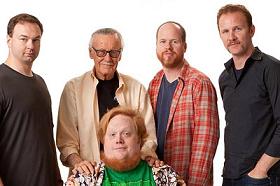 Founded in 1970 as a meeting place for what was then a microclimate of comic book fans, San Diego's Comic-Con has exceeded its humble origins, for better or worse. It's has expanded from a gathering to a focus group extravaganza. To say it "grew" might be wrong headed: urban sprawl is not the same as growth. Still, the fans are lovable no matter how mixed the Comic-Con bag is, and Morgan Spurlock is precisely the doc maker to tell us about it. With a quick wit and light touch, Spurlock follows the authority of his title with introductions to his archetypal characters (The Survivor, The Geek, The Soldier, etc.). Since the audience of Comic-Con covers the gamut from "people who've never read a comic book to people who've never left their parents' basement" his structure is helpful. What would have been more helpful is if Spurlock had been more incisive. (He often skates over the big issues in the interest of courting broader audiences.) Comic-Con has stopped being about comics, a fact detrimental to the sellers of comic books, but does the commentary need to end there? Whether it should or not, the film is likely to court so large an audience (fans and non-fans alike) that those who'd generally spend their $12 on the newest sci-fi might be putting their money into the documentary till. Spurlock's net worth can only grow.

Our first character is "The Geek." His parents were responsible for bringing the Star Trek conventions to their part of Middle America and he works in a bar where dialogue revolves around the outcome of hypothetical fights between comic book characters. He's got a clear home base and a dream of drawing for comics. To him, Comic-Con is a job fair and he's going specifically for portfolio reviews. "The Designer" lives in a town "where people stop to use the bathroom before skiing" and in her isolation has developed an epic skill with costumes. She considers her performance in the coming Masquerade Show a "metaphorical suicide mission for my career." Forget being discovered at the Swann's Drug Store, her big goal is to be recruited to make costumes in a place more official than her garage and this is her audition. "The Lovers" met at Comic-Con last year and this year, James is using Kevin Smith's panel to propose to Se Young. Her slight petulance and his anxious passivity make for great comic tension. When she says of her BF's pending forum contribution, "I just hope your question isn't lame" you can't contain the anxiety.

This risk of acceptance and rejection is all over this sweetly comic journey, and the scariest risk is also the least sexy. "The Survivor" has been attending Comic-Con for more than three decades and selling comics every time. This year his company is in such straits he's forced to put his most prestigious collector's item on the market for half a million. His struggle through the first two days of the convention are grueling yet he barely belly aches about how "Lucas owns the loading docs so we can't use them," even if he, more than anyone else, knows the detriments of losing Comic-Con to ancillary media interests (movies, video games). When a few commentators say "it's Pop Culture Con," Spurlock suggests there are no tears spilt in the transition, but he has to feel that way: look at the his list of producers. This is for the fans and if you're not a fan...well it's playing to you, too.

When an MC says, "it's not just costume, you're becoming your character" the notion of escape is finally approached, but it's disappointingly glazed over. We're talking about grown men and women participating in something like a phenomenally haute Halloween. Not that comparisons are necessary but when Errol Morris gave us a cross section of obsessive behavior in Fast, Cheep and Out of Control, "why?" was a pretty basic question and the answers were worthy. We have access to these really interesting, intelligent, easy to watch fans but any interrogation of their motivations is treated like self-evident information. They're enthusiastic, which is lovely to watch but they're also "the world's largest focus group" and companies want to "dig into this love and get the money out." It's possible Spurlock wants to protect their love. So why make a film about it?

If Comic-Con is just fun, the stakes are low and the rewards high. But a movie's driving a hard bargain when it amps up the fun and skates over the pitfalls. But so go the triumphs and travails of pop-docs. Someday we'll have a doc about that, too.