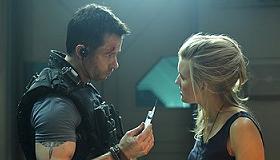 A sleek, slick and shameless rip-off of John Carpenter's Snake Plissken films Escape from New York and Escape from L.A., Lockout sees super-spy Snow (Guy Pearce) framed for espionage and sent to a frozen future-prison to rescue the President's daughter Emilie (Maggie Grace) after the inmates are unthawed and unleashed. Upping the ante is that Snow's partner—the only man who can clear his name—has already been imprisoned in suspended animation. Can Snow save Emilie and clear his name? Equally important: will he look good, ie, misty with a '90s-ish sheen of fake sweat, doing so? Lockout isn't high art, but it's ridiculous fun, and its $30 million budget is low enough to guarantee a good return at the global box office.

Directed by Stephen St. Leger and James Mather, who also share screenwriting credit alongside producer and mid-level mogul Luc Besson, Lockout's supreme weapon is Guy Pearce. The Australian actor pumped up both his biceps and his comedy chops to play a classic antihero—think Indiana Jones, Phillip Marlowe—who takes more beatings than he dishes out. And St. Leger and Mather totally nail Pearce's great dry deadpan and ability to take a punch well. Even in the film's limited range, he hits every note.

The architects of the film smartly cast quality actors as the bad guys: Joseph Gilgun, grimy beyond belief, is the hotheaded Hydell, while Vincent Reagan is the more coolly sanguine Alex. As for girl-in-peril Grace, her reprise of her "professional abductee" work from Taken is nicely-turned, and she has good chemistry with Pearce. The plot adds just enough trouble to the mix to keep the slender 95-minute running time taut, and while our hero is skilled, he's hardly dominent—instead of playing chess while the other characters are playing checkers, it's more like Pearce is playing Connect Four while everyone else plays tic-tac-toe.

While Lockout sails over the ludicrousness of the plot, it gets dinged by one bad SFX sequence, a motorcycle race, that looks like a bad inter-action scene from a cheap video game. But the rest of the film looks good, feels right and hits the right matinee-mash-up tone of over-the-top action and zinging one-liners. It's an agreeable rainy-day afternoon at the theater for people who dig two-fisted fun. So many action films suggest that only one guy—Rocky! Rambo!—can do the job. But after watching Lockout, you just thank Guy Pearce for getting the job done.