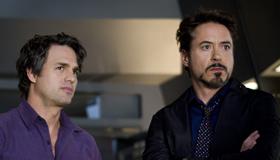 The bad news is that if you haven't seen Thor, Captain America and Iron Man 2—that's six hours and three minutes of homework—The Avengers won't make sense. The good news is if you're a human under the age of 45, you probably already have. Or you'll at least be sitting near a Marvel movie A-student who'll forgive you for whispering, "Wait, that giant blonde dude and that skinny brunette guy are brothers?" Headlong, hyper-kinetic and thoroughly uninterested in playing catch-up, The Avengers is the culmination of two years of summer blockbuster buzz. Now that we've spent over a billion and a half dollars buying tickets to see Chris Hemsworth, Chris Evans and Robert Downey Jr. solo, we can get them in a multi-pack with Mark Ruffalo's Hulk, Scarlett Johansson's Black Widow and Jeremy Renner's Hawkeye thrown in for kicks (or for historical accuracy, if you're a longer-term fan). Finally seeing the damned thing is a bit like standing around a cuckoo clock waiting for noon: you know what to expect, yet you're thrilled into smiling. The Avengers should dominate the May box office—it came, it chirped, it will conquer.

It's a compliment to Loki—Thor's vengeful adopted brother, last seen plummeting into a wormhole—that he returns as the only villain in a six-against-one smash-up. As played by Tom Hiddleston, a tall, slender and smart Brit, Loki has Iron Man's brains, Captain America's brawn and Hawkeye's accuracy with a weapon, here, a mind-controlling staff that he wields with the grace of Fred Astaire-turned-assassin. His grand plan is to destroy his brother's beloved earth by finding a tall building, opening a hole in the sky, and inviting in a metal army who will enslave humankind. Apparently, bootleg copies of Transformers 3 made it to Asgard. Meanwhile, Samuel L. Jackson's Nick Fury has been preparing for something like this to happen and quickly rounds-up his superheroes of fortune as far as India, Russia and outer space for an awkward meet-and-greet that's like the first day of superhero summer camp. They clash, they mock, they test, and finally they fight alongside each other in a build-up that's so teasingly delayed, the audience bursts into applause for a shot already seen in the trailer.

The Avengers almost works. It's funny and it's physical, but even at two and a half hours, it plays like it's on fast-forward. Forget character development—there's not even character explanation. The lesser Avengers are most slighted. After two movies with Black Widow and Hawkeye, I know less about them than I do the fighting Panda in Tekken. But at least Johansson and Renner get to square off in the flick's best mano-a-mano battle, which is thrilling and wince-worthy because they're human and evenly matched—everyone else just slams each other against trees. Much of the movie is rotating video game mash-ups: Thor against Iron Man, Iron Man against Hulk, Hulk against Loki. It'd get monotonous if writer-director Joss Whedon hadn't written in literal punchlines—there's at least two face-smashes that get a loud laugh. And some of the best duels are mental, like a calculating showdown between Black Widow and Loki. They never touch, but the violence hums.

The problem is that after controlling their own fiefdoms, these characters don't play well with others. After selling us on a sad and soulful Captain America and an operatic Thor, their pulp majesty is cut off at the knees by throwaway quips from Downey Jr.'s Iron Man ("What is this, Shakespeare in the park?") who still operates as though he's in his own movie. The comedy zings and I'd give an arm to have Whedon take over Iron Man 3, but I'm with the Cap when he sighs, "Is everything a joke to you?" In order to shoe-horn in The Avengers before Thor 2, Whedon has to shrug and ignore an ending that had Thor trapped on Asgard longing to reunite with his dream girl scientist Jane (Natalie Portman). Here, he somehow lands back on earth no problemo, and when he learns Jane was transferred six states away for her own safety, he doesn't even bother to visit. And Samuel L. Jackson continues to be the franchise's weak link as an unconvincing military bureaucrat. Though his co-stars fight in horned helmets or turn green when enraged, he can't even credibly wear an eye patch.

Surprisingly, it's the Hulk who lumbers away with the movie. In contrast to the last two efforts to deepen Hulk with woe and wrath like a minty Brünnhilde, Mark Ruffalo plays him like a guy who just wrapped up a coffee date. His Bruce Banner is scruffy, mellow and at peace with the fact that he's a normal-ish man doing his best not to slip into a homicidal rampage. In India, he must have done a lot of yoga. As he chills out in S.H.I.E.L.D.'s invisible plane, you sense his compatriots musing, "That's the living embodiment of rage against the machine?" It is. And it's the contrast that sells it. Give Ruffalo his own Hulk movie—hey, third time's a charm.

If such a thing can be said about a $220 million dollar blockbuster, The Avengers needs more ambition. Sure, it's fine for most films to host their battle royale in downtown Manhattan, but the superfriends deserve more. Prehistoric metal monsters smashing up skyscrapers? We've seen that before. For Avengers 2 (because there will inevitably be an Avengers 2) ask not what Michael Bay would do to New York—ask what Hieronymus Bosch would do to anywhere he damn well pleased. A film from a comic universe has no limits to its creativity. At least, one bold scene in The Avengers has no limits to its audacity. In an early display of Loki's strength, he touches down in Germany and forces the people to their knees. "You were made to be ruled," he sneers at the citizens of Stuttgart. Only one man stands: a Holocaust survivor. We know the villains of earth. Give us more about the villains—and heroes—of our imagination.