close
The bald and the brilliant—and their blah buddy movie 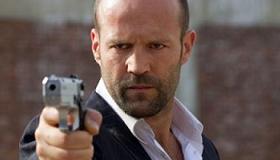 Action star Jason Statham takes on a mini-me in Boaz Yakin's Safe, a high-octane genre picture that spends too little time building relationships between allies and too much—if there can be too much—on ass-kicking and skull-cracking. Writer-director Yakin (whose resume runs the gamut from the Denzel Washington football drama Remember the Titans to the Brittany Murphy/Dakota Fanning comedy Uptown Girls) is adept at crafting characters who are deeply and believably isolated. Bringing them together is an entirely different story. Centered on Statham's hard-bitten bruiser with a heart of gold and the tiny girl genius (Catherine Chan) he semi-accidentally rescues from the exact same Russian mobsters who've made his life a living hell, Safe bangs along respectably enough, all thrown fists and cheeky comments, but it never feels like more than a second-tier video game brought to life. Fans of Statham and audiences looking for an action fix will get what they pay for, but the film has scarce crossover appeal for anyone not already on board with its star and genre.

Safe opens with a seemingly innocuous scene in a New York City subway that serves to introduce us to both Luke Wright (Statham) and the singularly named Mei (Chan). Before we're entirely sure what's going on, the film flips into a series of flashbacks that illuminate not just Luke and Mei's tragic back-stories, but just how they got to that subway station to begin with. Luke is former fighter who boxed in local fights for scratch, until an unexpected win screwed a member of the Russian mob out of some big bucks. His punishment? Coming home to a group of thugs who have just murdered his pregnant wife. Worse still? Luke's bizarre code of honor, plus some fresh threats from the thugs, have kept him from killing himself, and he's been forced to become homeless and cut off from the rest of humanity. There's a fair bit more to Luke, which Yakin unravels over time, but that's all part of Safe's attempt to feel meatier than it is.

Meanwhile, young Mei was plucked from her life in China to work for the Triad crime syndicate in New York City, thanks to her "mind like a computer," which can compile and calculate all the different sources of (illegal) income the gang takes in, pushes out, and needs to collect on. Her memory is much neater than anything technology could provide, and there's no paper trail. Unfortunately, the crafty Mei escapes from the Triads during a bust-up with the Russian mob, leading her to the subway station, to Luke, and, of course, to a race against time to discover the value of that page-long number Mei recently memorized (hint: the film's title has a double meaning).

This all makes the plot of Safe sound relatively fluid, but Yakin is not content to just pit Luke and Mei against two mob factions—he also throws in dirty cops, dirty politicians, and a just-as-dirty rat or two. However, Yakin believably isolates both Luke and Mei, and their dual fringe existences-paired with the reality that everyone is against them—make the film's plot much easier to swallow. It's unfortunate, though, that it's just not very much fun to watch. While Safe may appear to be a buddy-actioner starring two very mismatched characters, little time is actually spent with Luke and Mei together, and far too much of the film is composed of set-up and separation. Instead, the film is given over to whiz-bang action sequences that feel cribbed from early versions of Grand Theft Auto, and while we learn plenty about both Luke and Mei, we never learn enough about them together. This could all just has easily been a one-man show, and the film wouldn't have missed a step.

The big draw of Safe is undoubtedly star Jason Statham. As ever, the bald Brit is ludicrously fun to watch, an engaging action hero who still has a damn good time with his work, even within the confines of his chosen genre. Safe is occasionally as interesting as its star, particularly when it trots out a cadre of skilled character actors (including Chris Sarandon, James Hong, and Reggie Lee), but it's not nearly enough to set the film apart from its action kin. Save this one for a late night cable watch.