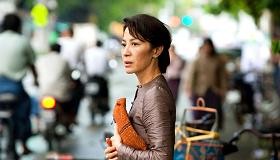 If all goes as anticipated, Nobel Peace Prize Burmese laureate Aung San Suu Kyi will take a seat in the lower house of the Burmese presidency on April 23, ten days after this well-intentioned hagiography's American release. It's a nice coincidence, but Luc Besson's biopic is the kind of deadly-dull affair that does a disservice to the cause it's hoping to advance. As played by Michelle Yeoh, Suu Kyi is a nice lady given to Twitter-ready inspirational quotes whose greatest achievement involved somehow managing to overcome the pain of not being a British housewife while incidentally acting as a symbol of a military-junta-repressed nation's pain. Stolidly maudlin, this enervating sub-middlebrow pic is doomed to well-deserved commercial obscurity.

Presumably to give Western audiences a point of identification, The Lady begins in 1997, when Suu Kyi's British husband Dr. Anthony Aris (David Thewlis) is diagnosed with prostate cancer. The sympathetic attending physician asks if Aris' wife can be contacted. "She lives in Burma now," Aris notes through stiff-upper-lip, and returns home to hallucinate back to 1988, when Suu Kyi was preparing a perfect dinner while assembling notes for her latest book. News of her mother's stroke takes her back to Burma, for "a week or maybe two," she says, a surefire indicator she's never coming back.

At the Burmese airport, a suspicious intake officer greets Suu Kui by slamming her passport on the counter like a bomb. (The foley sounds throughout are all out-of-proportion, as if Besson wishes he could get back to his action roots.) Things are no better in the hospital: the students are rioting and Suu Kyi is appalled when she sees soldier Bad News (Teerawat Mulvilai, who previously played the similar part of Vietcong POW guard "Little Hitler" in Rescue Dawn) shoot a civilian point blank. At her house, she receives legions of genteel dissidents who remind her that father Aung San—who negotiated Burma's independence from the UK in 1947 before being killed by rivals—makes her the logical spokesperson for renewed democratization efforts. By this point, Suu Kyi's saintliness has already been established by a shot of cockroaches skittering away from her candle, so it's no surprise when her first speech ("I've never spoken in public before") is greeted by rapturous, swing-swollen applause from the usual crowd of thousands.

Unfortunately, Suu Kyi's nemesis is General Ne Win (Htun Lin), who glowers and orders killings like a Cannon Films baddie circa 1980. Besson may be the mastermind behind such recent reactionary entertainments as 2008's Taken, but the guilty jolt of energy provided by Win's violence is quickly forgotten amidst Suu Kyi's endless depictions of suffering—a suffering that was apparently the result of grief at being separated from her family. "You are free to choose, madam," the junta informs her when offering her the chance to leave and (implicitly) never be readmitted. "Your husband and children or your country." Suu Kyi indignantly protests that's no choice at all, but the film seems to feel that's pretty much her either/or.

The Lady is sporadically brought to life by Thewlis, who labors under the delusion he's in a much more nuanced movie. When he's finally allowed into Burma to visit his wife, he's visibly wary of Suu Kyi's new allies, giving a "who are these guys" look to suggest the personal/political push-pull of a loyal-but-lonely spouse. Such hints of internal struggle die out as the narrative settles into two uneven strands: one involves Suu Kyi's struggles to nurse a brutally counter-fought movement, the other slightly more compelling thread involves Aris on the homefront, first battling in the press for his wife's freedom and later fighting cancer.

In a late reunion, Suu Kyi deprecates, "my terrible temper...my patience," before saluting "the indulgent husband that ever lived." This is the first and last hint a stubborn, pragmatism-be-damned activist might not be a meekly accommodating, easy-going housewife. By reducing her struggles to tearful smiles and sobbing strings vs. glowering shaven-headed goons, Besson does both his subject and the audience no favors.