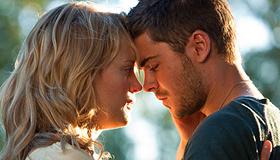 Author Nicholas Sparks has certainly found the magic formula for novels that translate into box office success. With sizable hits including The Notebook, Dear John and Message in a Bottle, Sparks has defined the modern-day, movie-friendly romance. It's a formula, and you'd expect it to work in The Lucky One, a sudser about a soldier who finds a photo of a beautiful girl on the battlefield and tracks her down after returning from the front lines (leading, of course, to love and other complications). But the emotions are flat, predictable and forced when they ought to be romantic. Perhaps star Zac Efron is just trying too hard to play grown-up but The Lucky One should only please his and Sparks' most zealous fans. Box office might be okay at first, but should peter out quickly—not even approaching the megabucks returns of the recent Sparks-a-like The Vow that seemed more true to form to Sparks than Sparks himself.

With classy director Scott Hicks (Shine), this kind of female-friendly soap opera should have worked, at least on a visceral level. But the emotion never kicks in on any big scale and it's hard to buy the contrived set up that has Logan (Efron), a dedicated soldier in Iraq, find a mysterious photo of a gorgeous girl that he seriously thanks for saving his life—more than once. So when he comes home, he decides he has to find the real thing. How he does it is not really believable, but it doesn't have to be in this kind of romantic fantasy if you buy the premise. Unfortunately, Hicks and screenwriter Will Fetters never make a convincing case. At any rate he does somehow find his angel in the person of Beth (Taylor Schilling), and without spilling his secret, infiltrates the life of this single mom emerging from an estranged and difficult relationship with her ex-husband (Jay R. Ferguson). And she has another issue: her brother was killed in the war and she's not exactly raring to fall for anyone who reminds her of that.

Certainly, this set-up could have had potential and it's easy to see what drew Efron to the role. After all, he doesn't have to shave and gets to have a passionate and steamy love scene or two. Plus, he gets to confront the ex and bond with the son (Riley Thomas Stewart). He even gets to play soldier in the film's early scenes. Unfortunately, Efron—a pretty good actor in the right material—never ignites as Logan and never convinces us this far-fetched connection could really happen. In other words, he just doesn't feel it and neither will the audience. Schilling tries her best but can't find any chemistry with Zac. She's nice to look at though: pretty as a photo and just as simple. Blythe Danner could have phoned in the grandmother role that she's played so many times, while the big bad ex Ferguson is strictly one-dimensional. It'd be nice to see Efron tackle a meaty grown-up role. But this isn't the one.