close
Great fun for any age!

The Pirates! Band of Misfits 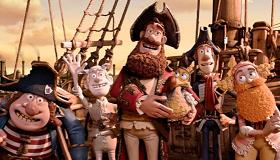 The Pirates! Band of Misfits is one of the funniest animated films in years, or to put it in terms you scallywags can understand: it's a treasure trove of laughs. Coming from Aardman Studios, the outfit responsible for Wallace and Gromit and the classic Chicken Run, this film's quality is no surprise; Aardman specializes in clever ‘toons that play as well for adults as they do for kids, maybe better. With Hugh Grant (in his ‘toon debut!) voicing the bumbling, but lovable Pirate Captain, the plot centers on his intense efforts to best his key adversaries and win the near-unobtainable Pirate Of The Year Award. Sure the story is silly but what makes this cook as well as it does is a smart script by Gideon Defoe (based on his own book) and a terrific international cast that knows how to deliver those choice lines. The box office bounty should be sweet once word of mouth gets out that the film is pure, hilarious fun for just about any age.

With the success of the Pirates of the Caribbean franchise whetting the box office's appetite, this animated romp is perfectly timed to cash in on pirate-mania, but it is also the rare ‘toon that manages to offer up contemporary satire, kid-pleasing slapstick and wonderfully nuanced characters all at once. Key to this is Grant's take on the Pirate Captain, a nice but consistently under-appreciated criminal of the high seas, whose goal in life is to win Pirate of the Year, particularly if this means beating his chief competition and favored rivals Cutlass Liz (Salma Hayek) and Black Bellamy (Jeremy Piven). In addition to this formidable quest, he finds his goal sidetracked as he and his crew travel from Blood Island to London where they must do battle with an evil, but cunning Queen (Imelda Staunton) and find their path to glory intertwined with awkward scientist Charles Darwin (David Tennant). Perhaps best of all the supporting players is Captain's loyal parrot Polly, his friend and the key to his victory. Turns out Polly isn't a parrot at all, but a rare prehistoric dodo bird who becomes the Queen's object of desire, and she'll stop at nothing to serve Polly up as the centerpiece of her occasional dinners, where only the rarest creatures are on the menu.

Among the strongest sequences is a riotous take-off on awards shows including the use of split screens and a judging panel that must be seen to be believed. The admirable thing about Pirates is it doesn't pound home any of the jokes or dwell on the gags, which means repeated viewings are a must just to catch everything. The movie is full of throwaway gems. The cast, led by Grant, is aces throughout, and production values are first-rate, including a great, and perfectly chosen score.

Audiences will want to set sail for this cool ride that could have a nice family run until Pixar's Brave and DreamWorks' Madagascar 3 arrive in June.