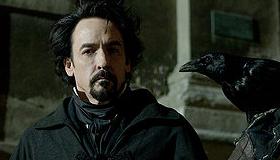 Set in Baltimore in the days before the writer's mysterious death, The Raven uses Edgar Allan Poe's stories as the basis for a series of crimes in which the writer himself becomes an unwilling detective. Likely to disappoint both literary aficionados and action-thriller fans, the film neither captures the creepy atmospheres of Poe's influential writing nor works on its own. Box office won't live long enough to mourn Leanor.

Though he once defined intelligent dude-dom for a generation (Say Anything, Better off Dead) and, later, the troubled passing of adulthood into middle age (High Fidelity, Grosse Pointe Blank), John Cusack has finally reached the Nicolas Cage phase of his career. In The Raven his portrayal of writer Edgar Allan Poe is given to wild mannerisms and bug-eyed emoting; he seems to be amusing himself but not he's connecting with much beyond that.

Directed James McTeigue (V for Vendetta), working from a script by Ben Livingston and Hannah Shakespeare, the film opens with a card stating Poe died under mysterious circumstances. The story then presupposes what might have led to his fateful end, with a serial killer taunting Poe and the authorities with clues and crimes inspired by the writer's own stories of detective fiction and gothic horror.

Though one might assume the film would reward those familiar with Poe's life and lore, there isn't much need to be familiar with his work before seeing the film because a character will assuredly mention every reference drawn from Poe's writing. The film doesn't feel like something steeped in Poe's world as much as a sub-101 level tutorial. High school textbooks have more feeling.

Eastern Europe stands in for late-19th century Baltimore, and most everything else feels similarly inauthentic. When a chase scene leads into a fog-shrouded forest it is without a touch of irony or self-awareness; that McTeigue believes "Fog = Spooky" says all one needs to know about the massive lack of imagination and vision from the director of V For Vendetta. (Even the opening and closing credits are ugly and nonsensical.)

Cusack tries to make Poe into some kind of off-kilter charmer, a word-spewing prototype for Hunter S. Thompson one moment, the original emo-moper the next, and beneath all that is a gleeful naiveté reminiscent of Johnny Depp's performance in Sleepy Hollow. (Tim Burton's version of the Headless Horseman seems to be a general touchstone for The Raven.) And it's not just that the storytelling and filmmaking let Cusack down—though they do —but that his heart doesn't seem entirely in it, as if he is hoping for this cockamamie thing to end just as badly as you are.