close
A battle of the sexes worthy of Ken Burns 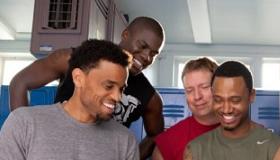 Imagine a version of He's Just Not That Into You starring a primarily African-American cast, all of whom actually read the book that's inspired their romantic misadventures, and you have a good handle on Think Like a Man. A battle-of-the-sexes comedy that carefully balances the odds—if not our sympathies—for both genders, Tim Story's latest offers the same kind of smart, funny sensitivity that distinguished the director's 2002 breakthrough, Barbershop. A winning cast and solid writing from screenwriters Keith Merryman and David A. Newman (Friends With Benefits) should appeal to men and women alike, and keep the film in theaters for a few weeks—or at least until the tidal wave of summer blockbusters washes smaller competition like this away.

Think Like a Man is neither adapted from nor inspired by Steve Harvey's self-help book Act Like a Lady, Think Like a Man: in the film's world, just like our own, Harvey's tome is a best-seller that women buy in droves, even if they read it with suspicion. While a tight-knit group of male friends meets regularly to celebrate their conquests and commiserate about their relationships, their female counterparts pore over Harvey's words, aiming to level the playing field—or better, get a leg up—on how to secure a man without sacrificing what they need. But when the guys discover Harvey's book has essentially laid bare all of their schemes, plans and expectations, they decide to wield it themselves to turn the tables on their ladies and regain the upper hand.

Not unlike He's Just Not That Into You, there's a remarkable diversity of relationships in Think Like a Man's ensemble-driven narrative: Dominic (Michael Ealy) aspires to be a chef and worries his low-rent digs will turn off Lauren (Taraji P. Henson), a high-powered executive; lothario Zeke (Romany Malco) meets his match when Mya (Meagan Good) tests his interest by instituting a 90-day waiting period before having sex; over-committed Michael (Terrence J.) finds himself juggling the demands of both his mother Loretta (Jenifer Lewis) and hot single mom Candace (Regina Hall); and Jeremy's (Jerry Ferrara) comfortable long-term relationship with Kristen (Gabrielle Union) gets shaken up when she decides it's time for him to make a more serious commitment. The film explores the comedic possibilities while anchoring its characters in a believable world—it's only two extreme examples are one of complete marital harmony (via Gary Owen's dutiful husband) and scornful ex-husband (courtesy of Kevin Hart's strip club-loving divorcee).

Merryman and Newman dial back the clichés in order to let the chemistry of the characters work things out. Importantly, the film never vilifies either gender nor accept immature or inappropriate behavior. In an early scene between Lauren and Candace, the two women banter back and forth about their expectations and both give as good as they get, calling one another out while remaining supportive and sympathetic. Similarly, there's plenty of macho banter between the guys, but they keep each other in check, offer real perspective, and maintain a consistent sense of reality even when, say, Hart's character is ranting about how he used to entertain his wife by balancing a chocolate-dipped strawberry on his thong underwear. For the most part, the relationships between the men and women are built on substantial foundations, and their evolution feels natural-or at least naturally scripted rather than pure Hollywood plastic.

The ultimate takeaway is that the best way to make a woman happy is to do what she wants, but the film doesn't seem to want that as its moral. But the writing fails to observe the balance that emerges from a relationship in which one partner supports and encourages the other's dreams in a way that makes them feel empowered and motivated. And the player Zeke's seduction skills are so effortless and constant that we never get a clear sense of the change he's making-or the feelings he's developing—by spending time with Mya. When a rift erupts between the two of them, it isn't clear exactly what about her he connected with other than the fact she's blindingly hot.

Nevertheless, performances by the cast add dimension to the characters even when they're just going through the motions of boilerplate rom-com cliché. Malco's by far the most likeable player ever portrayed in a movie of this type. Henson continues to prove she's one of the most versatile and formidable leading ladies in Hollywood. Playing a powerful COO, she never sacrifices her femininity even when she's made fun of for being mannish. Ealy is smart and sensitive as the would-be chef who rightfully breaks through her defenses. Union conveys palpable intelligence and patience as a girlfriend who's trying to help her man uncover his maturity. And even Hart manages to turn his anti-relationship rants into funny, self-deprecating speeches that reinforce how out of touch he is—with himself more than anyone.

The film's secret weapon may be Gary Owen (best known for the sitcom House of Payne), who looks like a guy who just wandered in off the street, and yet manages to effortlessly communicate a mature point of view about relationships to friends who have yet to make those discoveries for themselves. But that's also what makes the film as a whole work: it's smart enough to know how these relationships could click—and why they don't—even if the story indulges in both the set-up drama and happy resolution. Rather than devoting endless conversations and comic set pieces to the idea that if you wait long enough, you'll never have to change, and you'll get what you want (see: every Kate Hudson movie), the film's aware that being with another person isn't all meet-cute and easy resolutions. In other words, Think Like a Man knows that relationships take effort, but that the secret is combining work and play—which is why it's both a fun two hours at the theater and the start of a thoughtful conversation with your significant other on the way home.