close
I tried very hard not to make double entendre, and there I go.

Turn Me On, Dammit! 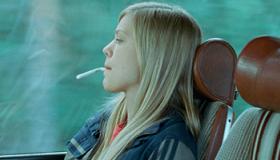 Alma's almost 16, and while she doesn't quite fit in her bra her libido is full-grown. So when her crush approaches her with an erection (brazen!) her pleased response strikes him as too furtive and he backed off. The boy's freshest rejection hears and shares the story with the school, effectively turning Alma into the school's newest pariah. She might not have been called "pervo" if no one knew--she definitely wouldn't have been called "Dick-Alma" (a nickname put to beautiful use in a more comforting part of the film). Yet both her easy scapegoating by less developed peers and the general fear she's aberrant for being horny drive home the point that a girl with a craving has the making of cultural taboo. Norweigian documentarian Jannicke Systad Jacobsen directs with an eye towards the natural awkwardness of puberty, but she reigns in the quirkiness that might destroy the feel of claustrophobia so common in small towns like Skoddeheimen, the hometown Alma and her friends flip off as the bus drives from it. It's a mixed blessing to see these dramas play out in Norwegian, surrounded by what we tend to imagine are more liberal perspectives on sex. Though, it doesn't precisely matter where the story's set: Juno can get bored and semi-tragically knocked up, but a girl out for her own pleasure is always going to freak people out. Normalizing the aberrance is a pretty ironic feat, since Alma's far from aberrant for being a lusty teen, but the way Jacobsen tilts the scales between laughing at normality and laughing at perceived abnormality makes this a comedy feel like it's in a universal language.