close
Not for kids or the uninitiated 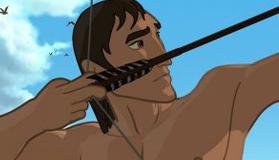 Since Arjun: The Warrior Prince premiered in India last week, director Arnab Chaudhuri has been busy telling anyone who'll listen that his animated adaptation of the Indian epic The Mahabharata isn't for children. The war scenes are moderately violent, and the characters speak in an archaic dialect of Hindi not readily comprehensible to children, (the American theatrical release won't be dubbed, but subtitled) but Chaudhuri might as well add that the adults he envisions in his audience are Indian, or at least familiar with the source material, since the disjointed, incoherent script does little to illustrate to outsiders what's great, or even interesting, about Arjun, his journey, or his story. Theatrical prospects stateside are limited by many factors.

The eponymous warrior prince is the third son among the five demigod Pandava brothers. The Pandavas and their cousins, the Kauravas, share an equal claim to the throne of their ancestral kingdom. Recognizing the young Arjun's physical prowess and quiet wisdom, the eldest Kaurava brother, the cartoonishly evil Duryodhan, schemes to exile the Pandavas from the realm and seize the crown for himself. Despite being an arching prodigy, Arjun is reluctant to raise a weapon against his cousins, even after Duryodhan publicly humiliates his wife and tricks his eldest brother, Yudhishthira, into giving up his small, swampy kingdom. It would be simple enough if Arjun found within him the ferocity to avenge his wife and brother's humiliation, trounce Duryodhan and his hundred brothers and capture the throne for his family.

Both to its credit and its detriment, the film isn't so straightforward. Arjun doesn't moralize, certainly not in the way that we've come to expect from children's movies (and most Hollywood films). But as a result it's hard to tell what the film is about, since Chaudhuri presumes that his audience already knows of Arjun's exploits, their cultural contexts, and their lessons/themes; as a result he doesn't see a need to articulate any of those things himself. The suspense surrounding the battle for the crown, for instance, is diminished by the script's disinterest in explaining the complex laws of royal succession. Arjun himself is an inexpressive cipher, a quiet observer propelled into action by others—and thus a hero difficult to root for. The plot progresses toward the final standoff between Arjun and Duryodhan haphazardly, and the big, theoretically climactic fight scene between them ends abruptly, with end titles explaining that a much bigger fight occurs after the events of the film; it might be the world's clumsiest set-up for a sequel. The script's one modern addition to the plot—a framing device that folds in on itself in the film's last quarter—is easily Arjun's funnest moment, but reads more as a child's wish-fulfillment than a believable plot development.

Arjun is the first Indian production to be branded a Disney film, but it owes its look much more to Japanese anime than Pixar's bobbleheads. The pastoral landscapes and palace backgrounds are lush and photorealistic, but the human characters are heavily stylized—they're all muscles and eyes. Confusingly, the child characters look like miniature adults, with the same facial features and chiseled torsos, making it impossible to determine their age. And the fight scenes are disappointingly stiff and static —I've played video games from the nineties that boasted more movement and grace. The film briefly flickers into glorious life when Arjun encounters a series of mythological creatures (green goblins, flying stingrays, and four-armed hunters) but they vanish from the screen almost as quickly as they appeared. In the end, Arjun feels like exactly what it is: a long, morally convoluted, episodic adventure tale crammed into a beautiful but overly respectful 90-minute film made for audiences who already know what's coming. If you're not a Mahabharata scholar, keep Wikipedia close at hand to figure out what's happening and why it's important, because the film definitely won't tell you.