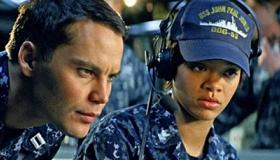 Game on. Battleship had the unusual box office strategy of opening in most corners of the globe before hitting its home market in the U.S., and so far has performed respectably with over $200 million in the bank preceding its North American debut. It may be good business for Universal to squeeze every last buck from the action-friendly overseas market before word of mouth and killer summer competition sinks this ship. A hyper-loud, non-stop assault on the senses, this two hour-plus CGI aliens vs. the military concoction is a half-baked conceit based on the Hasbro board game. Consider it Transformers meets Independence Day meets Pearl Harbor meets Top Gun. Its endless parade of explosions, battles and general mayhem makes Michael Bay look like Ingmar Bergman. Toplined by an unimpressive Taylor Kitsch (John Carter) as a free-wheeling slacker who becomes a war hero overnight, non-discerning audiences should lap up the fireworks and give up on anything resembling human relationships or coherent storytelling. Expect decent opening numbers but a quick retreat once audiences figure out that even the flat Hasbro board game has more depth.

It's understandable that Hasbro and Universal want to tap the money-minting mill they found transferring Transformers and G.I. Joe into cinematic gold franchises, but they forgot that without the human component, toys are just a heap of scrap plastic. Battleship starts well enough as we're introduced to Alex Hopper (Kitsch) celebrating his birthday at a bar where his attempt to pick up physical therapist Samantha (swimsuit model Brooklyn Decker) winds up getting him arrested. His embarrassed straight-as-an-arrow Navy big ‘bro Stone (Alexander Skarsgard) finally forces his brother to get his act together and join the Navy. Amazingly, he does and somehow moves quickly up the ranks while winning over the very well-connected Samantha—her father (Liam Neeson) is commander of the entire Pacific fleet. Then comes an unfriendly visit from extraterrestrials that escalates as the smartly-attired alien force decides to launch an "extinction-level" attack on Hawaii and the Earth in general. But fear not as Alex and his female colleague Raikes (pop megastar Rhianna) step up their defenses even as their associates are being blown to bits.

Competently made with impressive special effects, Battleship goes way over the top, a case of too much flash and bang-for-the-buck. Director Peter Berg and writers Eric and Jon Hoeber give our human characters little to do but push buttons and try to steer clear of the destruction derby. Kitsch, who was fine in TV's Friday Night Lights, is 0 for 2 on the big screen in 2012 after this and the John Carter debacle. Come back, Tom Cruise—all is forgiven. Decker is pretty to look at, but it's Rihanna in her film debut who might have an actress in there somewhere, even when given lines like "Mahalo, you mother f-ker!" as she blows aliens to bits. Skarsgard is credible and we can only thank God for Neeson who lends more authority and vigor to the film than it deserves. Too bad he's so under-used.

Despite the mass obliteration on screen, an obvious sequel is set up at the end. But the filmmakers may have overplayed their hand and sunk their own damn Battleship. Game over.