close
Next on the itinerary: Bhopal (it’ll be a prequel) 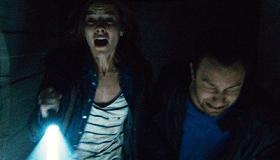 Young friends touring Europe pick up a transplanted sibling in Kiev who surprises them with an extreme tour to the remains of Chernobyl. These four are cavalier, athletic and about as old as the tragedy—as far as they're concerned, they're having a jaunt to edgy Pompeii. With a premise this insensitive you can expect low-rent scares and a plot that's unaware some people on earth think about the movies they watch. The closest thing Chernobyl Diaries has to savvy is a found footage intro that briefly travelogues the kids' trip before their Kiev reunion—it's the only time the look is faithfully employed—and the real low-expectation mark is the derivative gag the film treats like a third act shocker. With this much to look forward to, Diaries can only satisfy audiences young enough to consider Chernobyl their parents' nuclear catastrophe (whether or not they know the name Fukushima Daiichi), or audiences otherwise undisturbed by the exploitation of the late 20th century's most catastrophic nuclear accident. If this horror movie cashes in on the audience that echoes its character's awareness ("That's where the nucular thing happened, right?") then we're about to learn how low our national academic standards are. If this is an awareness raiser, Midnight in Paris is a doctoral thesis on bohemians. Still, it's getting hot outside, school's almost out and this is just the kind of thing we should be making out to and throwing popcorn at; if we're lucky those distractions will keep us from getting offended.

Amanda's boyfriend dumped her just before the Europe trip so Natalie talked her into coming; Chris is carrying an engagement ring destined for Natalie's left hand; and Paul, Chris' big brother, recently transplanted to Kiev where his slick American antics are a hit with ladies and getting him hit by locals. These four could have more character development if they were in a beer commercial. Uri, an amiable tank of a man, promises them a tour of the world's most toxic ghost town, so they board a van with a backpacking couple that proves how un-fun Americans are compared to peers from any other first world nation. These characters are interchangeable; their names are irrelevant and only offer the others things to scream. Once the team is shanghaied and their ex-military troupe leader disappears, Chernobyl Diaries becomes a fat-pencil checklist of accidental references to other horror films—these aren't homages, they're wild signals that Paranormal Activity creator Oren Peli can't have an original thought. Vacant bowling alleys invoke Daniel Day Lewis screaming "I drink your milkshake," hounds from The Hills Have Eyes snarl on the sidelines while Blinky, The Simpsons' three eyed fish, has a branch of family in the Prypiat pond. Funny thing about that last bit: when the shriveled fish rears its phallic head, the boys taunt each other to touch it saying, "don't be a pussy." The funniest part of that non-joke is the number of levels on which it was lost.

Tidbits of information are handed over with broad gestures and prove writers Peli, Shane Van Dyke and Carey Van Dyke can read Wikipedia. Reactor #4 killed 500,000 people; looters put contaminated Chernobyl artifacts on the black market and got people sick; there are bears in Russia. If you see Last House on the Left as a film about the depths people of comfort will stoop to when confronted with savagery, see this as a film about what incompetence people of comfort will enact when confronted with "nature's" equivalent of a zombie attack. Paul, who proposed the Chernobyl 3-hour tour, sees the broadest death toll and while I can't attest to caring about his guilt, shining a big light on such remorse does seem like a trend destined to grow—that and other riffs on Gilligan's Island with monsters. The next film Peli taunts Friedberg and Seltzer with, he might consider giving more space to the penitence of the careless fun-dealer—it's the only emotion that reached the final cut, so it must mean something to him.