close
It doesn't suck—except when it wants to 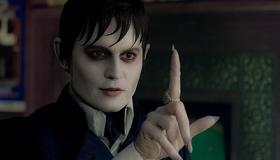 A cult favorite gothic soap opera that ran daily on ABC for over 1200 episodes in the late '60s, Dark Shadows has been decidedly Tim Burton-ized in its first big screen incarnation. Fans of the original will be happy it's back, but be warned: suddenly, this very dark saga is a comedy. Nevertheless, it's a great time at the movies and a wickedly clever cinematic treat. With a terrific Johnny Depp in the lead role of the creepy Barnabas Collins, a vampire transplanted 200 years into the future of 1972 and caught up in the antics of his descendents and the witch (Eva Green) who's stalked him for two centuries, this version is a far cry from the TV version. But it's faithful enough and makes for sensational sinister fun for those willing to succumb to its, uh, spell. Burton and Depp have done it again in their eighth screen collaboration, and the box office depends on the pair's drawing power. If word of mouth is strong this vampire comedy could have a profitable summer run as long as people realize it's more yuks than sucks.

The original TV show still has rabid fans, but most of those who are breathlessly awaiting this film version will be graying baby boomers, not exactly the most reliable moviegoing demographic. But with Depp in charge and Burton offering his usual bag of devilish delights, audiences don't have to know the TV show at all. In fact, with the emphasis on witty lines and great gags sprung from the bloodsucker-out-of-water status of a vampire who's been sleeping since 1750, the whole enterprise feels a lot fresher than the usual TV-to-film import. Like 2012's 21 Jump Street (which also has an obvious Depp connection), Burton and screenwriter Seth Grahame-Smith are smart enough to realize there is a lot of humor to be mined in the material without going rogue on the fans who loved it in their youth.

The basic premise has Barnabas (Depp) living the high life as the master of Collinswood Manor until he fatally falls in love with Josette Du Pres (Bella Heathcote), wounding Angelique Bouchard (Eva Green) in the process. Never underestimate a woman scorned—or in this case, a witch who turns him into a vampire and buries him alive for the next two centuries. Once released from his grave (and well-fed on the blood of construction workers) he confides in new family matriarch Elizabeth Collins Stoddard (Michelle Pfeiffer), the only contemporary inhabitant of the now-crumbling manor who knows his true identity. The other Manor members include psychiatrist Julia Hoffman (Helena Bonham Carter), bad brother Roger (Jonny Lee Miller) and rebel teen Carolyn (Chloe Grace Moretz), who find him an odd visitor—and Barnabas gives them lots of reasons to believe he's a weirdo. It's here also that he runs into a mysterious woman named Angie, who's clearly somehow connected to the witch who done him wrong.

The gothic underpinnings of the story clashing with the early '70s pop culture invasion make for a delicate balance, with exceptional production values and a tongue firmly planted in cheek, Burton pulls it off. Pfeiffer, a self-admitted major Dark Shadows groupie, is clearly having fun here, as is the rest of the perfectly chosen ensemble. Moretz again proves she is one of the best of her generation while Jackie Earle Haley as a bizarre caretaker steals his every scene. So, too, does Bonham Carter (Mrs. Tim Burton) with a weird orange wig to give her distinction. Still, this is Depp's show all the way and he doesn't disappoint. Cameos at a big party from four original cast members of the TV show just add to the fun although it is sad to note one of them, Jonathan Frid—the original Barnabas Collins—passed away last month before he could soak up the glory of this new wave of Dark Shadows love. He would have been proud.