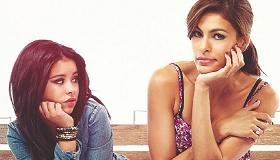 Eva Mendes may be ever-charming, but her harried single mother takes a backseat to daughter Ansiedad (Cierra Ramirez), a maturity obsessed teen. Produced and distributed as part of the Pantelion collaboration between Lionsgate and Televisia (recently responsible for Casa de Mi Padre) this archly self-aware coming-of-age tale fizzles, as the targeted Latino audience is upstaged by a culture more firmly rooted in the film's soggy Seattle setting. Box office won't be a wet blanket, but it won't signal blue skies either.

Mendes may have top billing, but she isn't the lead; Ansiedad (which means anxiety) drives the plot and much of the action. She's is itching to "come of age" so, inspired by her high school English class, she devises her own rite-of-passage ritual. While that sounds self-aware, knowing and clever, Ansidad's plans never take root and all that self-reference quickly turns forced and inorganic.

Mendes remains a charismatic and bold screen presence, with an active mind, sparking eyes and a comedian's control over her body. Grace is a perfect fit for her-theoretically-she's a rougher-edged, Latina Lorelai Gilmore, a single mom with issues and who raises her daughter as her daughter raises her. The film's best sequence intercuts Mendes and Ramirez as each navigates uncertain social and personal territory at separate parties. The sense these women are managing similar personal challenges separately and without realizing it is only touched on the once, and were it more developed that facet could have made the picture stronger. Hiram Martinez's script never delivers all that promise to Mendes, leaving her struggling to be more than a careless, flaky floozy.

Matthew Modine and Patricia Arquette support but never make much of an impression, though Mexican comedian Eugenio Derbez, who appeared in Patricia Riggen's Under The Same Moon, brings an unlikely pathos as Mendes' coworker with a not-so-secret crush.

Less a misfire than a missed opportunity, Girl In Progress squanders its time in high school, neglecting the mother-daughter story that forms its more interesting core.