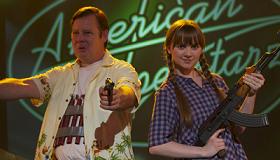 The angriest treatise on kindness and decency around, Bobcat Goldthwait's dark comedy God Bless America at first looks too violent to be distributed, even if it doesn't spill as much blood as Transformers, or as many pixels as The Matrix. What God Bless creates is a world of utter douche bags, children included, that its protagonist Frank (Joel Murray) dispenses to save the country. In the process of dispatching a lot of humans, God Bless creates a surplus of humane sentiment. It deserves a hard "R" and careful marketing, and Magnet Releasing, the edgy genre arm of Magnolia Pictures, looks like just the right company to do it. Dollars will be strong for this divisive limited and the capacity of this dark comedy to speak to millions is so high, one can only expect it to be one of Magnet's biggest titles of 2012.

You might expect Frank to be a meek guy-the sort waiting for his people to inherit the earth-but he's not. A vet and a divorce with a daughter, he's upright and does his part, even if he has a job he doesn't like and has to avoid his co-workers constant talk about Reality TV. Frank channel surfs to pave over his loneliness and the offerings on cable are crueler than what you saw in Idiocracy but just as stupid: a stunt show laughs at death caught on tape, "Tough Girls" watches a fight in the kitchen involving a used tampon, pundits yell about free speech, it's all past the point of pleasant pain. Frank is disgusted but has no escape in sight. The receptionist at work seems to be interested, but claims sexual harassment after he sends her flowers. He loses his job and then the doctor tells him he has an inoperable tumor (a horrifying scene in which the doctor pauses to take a call from a luxury car dealer). All Frank can do is cry...and watch more deplorable TV. This world sucks! And it's only a few degrees grosser than our own.

The killing spree that results aims to heroically reduce the national surplus of assholes; call it a cleansing ritual. Initially, Frank only wants to dispatch the irredeemable, but en-route he meets 16-year-old Roxie whose bloodlust outpaces his (though her penchant for preachy monologues is strikingly equivalent). She thinks he's just started, and that's Frank's ray of hope.

Not a formally ostentatious director, Goldthwait applies flourish carefully. Frank's meltdown remembers Sophie's Choice: when his 7-year-old daughter calls him (the only time she does) to scream that she wanted an iPhone NOT a Blackberry. The muted TV shows a spoiled 16-year-old screaming because her dad bought her the WRONG CAR. Who made this kid? And how did those influences break through Frank's best efforts? What we're looking at is the apocalypse of middle ground-common sense is tantamount to Christian uplift and just as intolerable. You could call it "hell" but what good will naming it do?

It's a bleak america (lower case), but a trenchant one. Goldthwait is very interested in inspiring kindness by showing its decline, and plenty of directors have racked up terrible track records trying to inspire non-violence by demonstrating violence-the joke isn't lost on him. Frank's first murder is ritually symbolic, but in the middle of his orchestrated movie moment, his plan backfires; it's as if Godlthwait refuses Frank a "movie moment" for murderous deflowering-the decision is moral and one of the film's least explicit. The rest is awash in explicitness, which means there's not much room for nuance but we're talking about a violent polemic by a man famous for a repellent voice-the last thing we can say about God Bless America is that it isn't what it promises...even with a title like that.

You'll laugh and be offended, but if you watch it and don't want to be part of the solution, you'll know which side of the line you're on.