close
Girl could do better 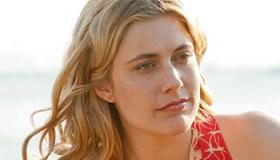 A suffocatingly current post-romantic comedy about a girl named Lola (Greta Gerwig) who's dumped three weeks before her wedding, Lola Versus arrives with a pedigree that suggests it should be better than it sounds. It isn't. The implacably trite script, directed by Daryl Wein from a script he co-wrote with Zoe Lister Jones, is too content with mild laughs and sitcom-simple life lessons to ever make much use of its richly talented cast. Gerwig's floaty charm is complimented by the likes of Hamish Linklater, Joel Kinnaman and a bunch of other young actors who've become exciting new faces precisely because they've managed to avoid material this bland. Cinematographer Jakob Ihre renders Manhattan a lush, sun-dappled place, warmer and more expressive than any of the film's characters, but the candied gloss of his work ultimately underscores a film in which nothing sticks. Marketed as the next hip comedy from "The Studio That Brought You 500 Days of Summer," Lola Versus has enough indie star power to rope in metropolitan audiences, but middling reviews and an R rating will make it impossible for Fox Searchlight to repeat their Summer success.

Lola is a bright and daffy Manhattan grad student. She lives in an improbably swank loft with her improbably attractive fiancé (Kinnaman), rocks a summer dress like it's a second skin and bikes around the neighborhood with a blithely self-actualized perma-smile that's half urbanite, half fairytale princess. Lola is what Cameron Crowe might describe as the last guileless girl in New York, but she's on the cusp of 30, and if movies have taught us anything it's that turning 30 is the ultimate human crisis. Sure enough, her fiancé takes off without much of an explanation before the opening credits can finish, and her once-perfect life is left in tatters.

And so begins a romantic-comedy that rejects the typical flow of its genre, dispensing with "girl meets boy, girl loses boy, girl marries boy so she never has to go through this agonizing (but quirky) process again" mechanics in favor of a story structured like the stages of grief. Lola struggles to learn twee lessons about how happiness has to come from within. Lola struggles for cash and turns to her parents for help, Lola dips a toe back into the dating pool, and Lola commiserates with her best friend Alice (whom Zoe Lister Jones reduces to a collection of safe zingers). Gerwig is so effortlessly winsome that the film is seldom painful (and whenever it teeters over the edge, Bill Pullman shows up to take Lola on a walk along the Highline and dispense some fatherly advice), but it's a classic case of "likable actress in an unlikable role."

It was just a few years ago that Wein and Lister Jones emerged onto the scene with their low-fi charmer Breaking Upwards, and while it may have been wise to traffic in the same milieu for their comparatively mega-budgeted follow-up, Lola Versus suggests that the duo chose to broaden their brand where they couldn't figure out how to strengthen it.

For a film titled after a raucously anti-establishment concept album by The Kinks, Lola Versus has none of the rebellious energy that its namesake implies, the story so diffused by a gaggle of underwritten supporting characters that Wein is never able to establish any sort of narrative momentum. This is essentially the story of a woman falling in love with herself, a concept that the script quickly enervates by refusing to provide Lola with a legitimate romantic prospect, shoving Lola towards self-acceptance by ensuring that everyone around her is a living nightmare. She's caught between a mumbling and emotionally abusive jerk, a self-sabotaging best friend type and a rollerblading prison architect with a mutant penis—what's a girl to do!

Lola Versus never comes close to generating the sort of laughs or attitude required to fill out such a frail narrative. It criminally undervalues the major talents of its supporting cast, while spending way too much time with Lister Jones' snarky sidekick, whose schtick completely submarines the film's desperately hip veneer; despite delivering an ostensibly empowering message, these are the sort of willfully ignorant women Bridesmaids was supposed to have drop-kicked into oblivion. The aesthetics are left to do most of the heavy lifting, Jakob Ihre's (Oslo, August 31st) evocative lensing is proof the Swedish DP has a long and varied career ahead of him, but Wein fails to whip these beautiful images into much that's meaningfully expressive of Lola's mindset. It's obvious that she's too good for her fiancé, but by the time Lola finally falls in love with herself some 90 minutes later, it still feels as if she could do better.