close
Same as it ever was 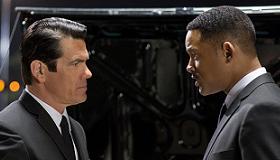 Released a week shy of Men in Black's 15th anniversary, Men in Black 3 is exactly what you'd expect: amiable mediocrity and nicely laid-back performances with pricy special effects plugging in the gaps where jokes should be. Though American audiences rebelled against the slightly more manic sequel, all three films are effectively the same. Once again, smart-talking Agent J (Will Smith) and amusingly unflappable Agent K (Josh Brolin) must save the Earth from imminent alien conquest and general catastrophe. This time, however, it's happening in 1969 after J travels back to team up with a younger version of his partner (back in 2012, Tommy Lee Jones is around for what's effectively a 2nd-billed cameo). The period setting and casting change-ups are barely relevant to the overall effect, which makes it questionable whether audiences will cotton to Men in Black 3's expensive, yet modest pleasures in an ever more hyperbolic, superhero-clogged summer. Given its $375 million total cost for production and marketing, the film is unlikely to be a hugely profitable investment.

The alien menace is Boris The Animal (Flight of the Conchords' Jemaine Clement, who neither sings nor makes jokes), whose sole personality trait is a rather cool Cronenberg-vagina of a hand, out of which crawls a steel-tipped beastie. Arrested in 1969 by K and sent to space jail, Boris breaks out of Lunar Max, once again proving that outsourcing penal functions to private contractors is a dubious decision. Angry that K shot off his arm while fulfilling his legal duties, Boris travels back in time to kill the agent before he gets the chance. J comes to work one day to find that time travel has wreaked the usual havoc. In this reality, K's been dead for 40 years, and J must track Boris to 1969 to save his partner and the planet.

At the film's opening, J and K are on the outs. There's no happy partner bonding over lunch—over a shawarma, K grumbles, "You know what would go good with this is silence." That could've been a line in the first two films, but script necessity means audiences are now supposed to wonder what (alien) bug has crawled up Jones' ass, all the better to set up a presumably emotion-filled finale in which J learns about a key part of his past. In an effort to solve the script's problems, Will Smith halted production for months, but the final product and would-be-heartwrenching final revelation is still plot-hole-ridden and shoddy.

No matter: Brolin is an excellent, unflappable replacement for Jones. The '60s gags are predictably lame: it's discovered that Andy Warhol (Bill Hader) was actually a Man In Black who just couldn't handle all those counterculture freaks. ("I can't listen to sitar music anymore," he whines. "I can't tell the men from the women.") The race jokes are slightly sharper—when pulled over by bigoted cops, Smith claims to be "starting forward for the Detroit Darkies"—but it's for the best when Men in Black 3 ditches the retro humor and lets the cast carry the film.

Ace support is provided by Griffin (Michael Stuhlbarg, of A Serious Man and Boardwalk Empire), a fifth-dimensional being (or something) who puts an amusingly neurotic topspin on his lines, which mainly consist of reeling off the parallel-universe possibilities for what's about to happen. Between Smith, Brolin and Stuhlbarg, the film manages to get past its ramshackle story and sometimes surprisingly-shoddy CGI (all that money couldn't buy convincing flames). In every sense, this film picks up exactly where the last one left off. But I'd rather defend corporate mediocrity and let the lead actors breathe, as Men in Black 3 does, than suffer another Marvel (Comics) marvel that constantly ramps up the chaos. At least the 3D, if unexceptional, is bright and shiny enough to avoid the oppressive darkness that normally comes with the format.