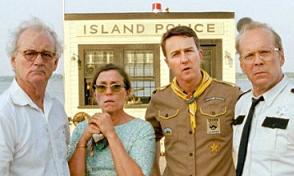 Given the prestigious opening night slot at Cannes, director/co-writer Wes Anderson finds himself in competition for the first time at the French film festival—and Moonrise Kingdom is worthy of prizes. The director of quirky fare with a rabid cult-like following (Rushmore, Bottle Rocket, The Life Aquatic, The Fantastic Mr. Fox) has made a charming, magical and really funny new work about two unique young kids discovering love over one unforgettable summer, and it's the director's most accessible movie yet. Opening in America on May 25, strong word of mouth and a marquee cast could turn this Kingdom into Anderson's biggest box office hit to date, and it should prove a critical hit and awards magnet. But make no mistake: this is undeniably the work of a director with a very specific and pointed comic style that is not for every taste. Those who succumb to its charms will be transported.

Immediately, Anderson and co-writer Roman Coppola establish a time and place that is both haunting and lyrical. During an idyllic summer in 1965 on the New England island of New Penzance, we meet its two young stars, book-mad 12-year-old Suzy Bishop (Kara Hayward) who is about to experience first love with brilliant 12-year-old boy scout Sam Shakusky (Jared Gilman), a kid recently tossed aside by his foster parents. Meeting first at a church pageant, the pair carry on a year-long correspondence during which they plot a secret pact to run away to a private island they nickname Moonrise Kingdom. Sam manages to bolt the scout troop's camping location (where he has been taunted and bullied) to meet up with Suzy in the wilderness after she ditches her home and overbearing parents (Frances McDormand and Bill Murray). And the chase is on as Anderson alternates between the young sweethearts' budding relationship and the adults determined to restore heartbreaking sanity, a posse that includes her parents, a rigid scoutmaster (Edward Norton), a local cop (Bruce Willis) and a social worker (Tilda Swinton), plus the on and off screen narrator (Bob Balaban). We're all caught up in the summer adventures of these two innocents whose essential purity is contrasted by their obnoxious—and less mature—elders.

Plenty of films detail first love, but nothing short of George Roy Hill's sweet A Little Romance (1979) has captured it with quite the originality and freshness of Anderson's work here. It's a risky proposition to center an entire film around two newcomers, but Hayward and Gilman prove to be exceptionally fine young actors who bring individuality and style to Suzy and Sam without ever veering into cloying clichés. Both are completely natural as they deliver Anderson and Coppola's precise dialogue with the same assurance as all the veterans in the cast. Murray and McDormand create hilarious energy together as a long-married, now quite-agitated couple chasing their rebellious daughter, and while Norton's scoutmaster could have been too contrived, he donates as understated humanity, as does Willis' concerned and humane local sheriff. Swinton gives nuance to a potentially one-note role and Balaban is perfect as the narrator, a great device that gives the film the feel of one of the books Suzy loves to read.

Production values are exceptional, particularly Robert Yeoman's lilting cinematography and Alexandre Desplat's terrific musical score which gets a unique shout out (literally) during the must-not-miss end credits. Moonrise Kingdom is one of this year's most memorable movie experiences, an irresistible and completely enchanting look at first love Wes Anderson-style.