close
As easy—and interesting—as shooting fish in a barrel 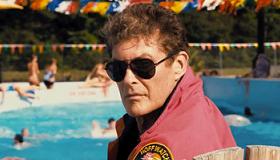 It seems impossible that a sequel to a movie as ridiculous as Piranha 3D could disappoint but Piranha 3DD stops at mediocre before arriving at gloriously bad. Director John Gulager, who successfully shepherded the Feast series through three installments, ups the ante on a series whose central appeal is its utter gratuitousness of fish and flesh and still arrives at a final product that feels even slighter than its predecessor, not to mention shorter. Although Weinstein can expect limited theatrical appeal for this follow-up, Piranha 3DD should stay afloat with home entertainment sales.

Jettisoning almost everything from the first film save for cameos from Ving Rhames and Christopher Lloyd, Piranha 3DD takes place 50 miles away from the original massacre in Lake Victoria, which is now a ghost town. Businessman Chet (David Koechner) blazes ahead to re-open his struggling water park as a haven for grown-ups with "water-certified strippers," despite the objections of his marine biologist stepdaughter Maddy (Danielle Panabaker). Despite being distracted by a love triangle involving hunky ex-boyfriend (Chris Zylka) and the sensitive guy next door (Matt Bush), Maddy desperately attempts to avert another bloodbath. But once Chet recruits David Hasselhoff (playing himself) to preside over the opening ceremonies, all literal fish hell breaks loose.

There's no way to describe what actually happens in Piranha 3DD without making it sound patently absurd: piranha evolve in the span of a year, piranha gestate inside a girl's vagina, marine biologists look like Danielle Panabaker. Oddly, Gulager's depiction of these cartoonish events seems restrained—if anything the film, it's too understated. That modesty even extends to the film's running time, which barely reaches feature length at 83 minutes, and spends so much time setting up the mythology of its world and introducing its characters that by the time it acquiesces to its raison d'etre—showing people getting dismembered by killer fish—it's almost immediately over. While that's a virtue for character and story, here those are worthless distractions. Who goes to Piranha 3DD for anything other than nudity and carnage?

In the pantheon of comely Final Girls, Panabaker makes an effective lead: she's as convincing enough as a budding genius as a movie and she shows audiences enough skin to satiate despite the horror rule that demands her virtue remain intact. That said, she's been a horror movie lead three times in four years, and she deserves more diverse work. Despite his role as the requisite hunk douchebag Kyle, Zylka effectively charms the audience into believing he possesses more substance than we expect, and Bush quietly presents an alternative that is equally formidable, regardless of the fact that he's very, very short.

The film's oddball cameos plays better in theory than in practice, though Hasselhoff's willingness to send up his Baywatch transgressions—not to mention his C-grade celebrity status—provides several of the film's standout moments. But the obvious and uninspired utilization of folks like Gary Busey and Christopher Lloyd only underscores the film's wrongheaded approach to its subject matter: the filmmakers are so confident about the tits-and-teeth concept that no one bothers to do anything interesting. Maybe attracting the target audience for a film about giant boobs and piranhas is as easy as shooting fish in a barrel, but putting those two things together can be done more creatively. Unlikely as it seems, Piranha 3DD may be the only film featuring David Hasselhoff, an X-rated water park and a three-way between a girl, a guy and a fish that still doesn't go far enough.