close
Who's the hammiest of them all?

Snow White and the Huntsman 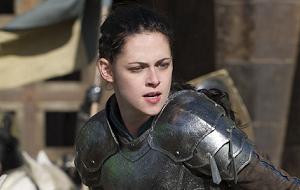 The recent resurgence of "revisionist" fairy tales means that audiences have been gifted not one, but two new takes on the Snow White tale in 11 weeks. In his feature debut, commerical director Rupert Sanders shows off his unquestionable flair and eye for style and design, but his Snow White and the Huntsman is an entirely different animal than Tarsem Singh's equally visually-bent Mirror Mirror. A dark and gritty take on the classic, Sanders succeeds mightily in the look and feel of his film, but his ability to direct his impressive cast is severely lacking—particularly his two leading ladies, Charlize Theron and Kristen Stewart, who chew the scenery as if it were a delicious (and not poisoned) apple. While the film benefits from solid work by Chris Hemsworth, Sam Claflin, and a highly skilled set of dwarves, it's hard to imagine who will thrill to this violent, gorgeous, and empty film.

The script, by Evan Daugherty with additional work by John Lee Hancock and Hossein Amini, sticks closely to the bones of the classic Snow White tale, even pulling direct quotes from the brothers Grimm original. Young Snow is born into a kingdom of love, which is meticulously broken down after the death of her beloved mother and the domination of both her father and her throne by an evil and beautiful queen. Theron's Ravenna makes quick work capturing both Snow's father (Noah Huntley) and his kingdom, thanks to her evil and nebulous powers which are never satisfyingly explained. Snow is tossed into a tower and forgotten by everyone but Ravenna's hideous creep of a brother, until a magic mirror—a solid trick of movie wonder—tells the Queen that she is no longer the fairest of them all. Stewart's ingenious and brave Snow White flees to the horrifying Dark Forest with a huntsman (Hemsworth) on her tail who's been dispatched by the queen and promised a reward beyond riches.

Sanders handily and economically sets up both his characters and their motivations. Sure, that's a basic tenant of all movie-making, but it's one that often gets tossed by the wayside in films that use breathtaking visuals to elevate themselves beyond their simple stories. Eventually bonded together, Snow White (who is called this name only by her mother) and the Huntsman (who never even gets a name) set off for the palace of Duke Hammond (Vincent Regan), the last true servant of the dead king, the father of Snow's childhood playmate William (Claflin), and the leader of a small but mighty army bent on avenging the crown.

Along the way, the pair encounter both friend and foe and explore forests both dark and safe, with Sanders working his visual magic. It's gritty fantasy style is a good fit, as like all fairy tale films, it must conjure up believable spells and sorcery while also rooting itself in some kind of reality to keep the whole thing from looking silly. Snow White and the Huntsman very firmly exists in its own world, a marvel created by Sanders' direction and what Daugherty imagined on the page, and its spooky handsomeness is easily the best part of the film.

Unfortunately, the worst part is the performances. Stewart is game, but she never captures any of the qualities we are continually told she possesses—after all, Snow White is not only supposed to be the fairest in all the land, she's also believed to have the ability to restore life itself to her desecrated kingdom. A tall order from any performer, especially when Stewart is still unable to kick some of her bad tics: she hides behind her hair and bites her lips. Yet it's Theron's Ravenna who's the most truly confounding performance. Theron screeches and caws like the birds that flock around her—a destructive biological impulse as Ravanna loves killing, eating, and wearing them. Theron has done "evil hiding behind a beautiful face" before. Just in December, she turned in one of the best performances of her career as the savage homecoming queen in Young Adult. But in Snow White and the Huntsman, all nuance is removed: Theron crashes and flaps about and we're all waiting for her to die. It's a pity that Stewart and Theron cannot live up to the rest of the film. Snow White and the Huntsman aches for a painful, pumping heart but its leading ladies are bloodless.