close
Bow down to the summer's supreme comedy 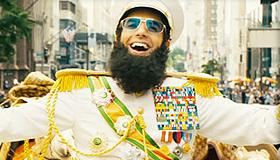 Middle East megalomania, antisemitism, sexism, racism and war-mongering are given side-splitting censure in The Dictator, a superb vehicle for Sacha Baron Cohen's over-the-top socio-political outrageousness. A worthy successor to his prior mockumentaries Borat and Bruno despite its more scripted construction, Cohen and director Larry Charles' latest finds the comedian assuming the larger-than-life guise of Admiral General Aladeen, the despot of the fictional North African Republic of Wadiya. While on a trip to the U.N. to protest forthcoming NATO strikes predicated on Wadiya's nukes program (which Aladeen can't claim are for peaceful purposes without breaking into laughter), Aladeen is abducted and left for dead by his traitorous uncle (Ben Kingsley), who wants to install democracy so that he can sell oil to foreign interests. Escaping torture and murder, Aladeen—unrecognizable after having his magisterial beard shaven—winds up in Brooklyn working for vegan feminist health food grocer Zoe (Anna Faris). Undercover as political refugee Allison Burger, he plots his return to the throne before his dummy doppelganger can sign a (gasp!) constitution, a quest that Cohen litters with sharp, profane one-liners, both politicized and just-plain-idiotic. Fleet, funny, and smart enough to not overstay its welcome, it's a commentary-coated R-rated comedy with supreme box office potential.

Aladeen is a cartoon lunatic whom Cohen makes an irresistibly ridiculous buffoon. Like Borat, he's gleefully inappropriate, whether it's showing off a bedroom wall lined with Polaroids of the celebrities he's paid for sex, or his habit of executing everyone who bothers him, including nuclear scientist Nadal (Jason Mantzoukas), who insists his warhead should be rounded when Aladeen thinks pointy is more frightening. The autocrat's most prominent trait, however, is his insane arrogance, which is epitomized by his making the name "Aladeen " mean both "yes" and "no" in the Wadiyan language, leading to an inspired skit in which a doctor informs a patient that he's "HIV Aladeen." Should the confused man react with joy or misery? Though maintaining a lack of ethnic specificity (Aladeen claims he's not Arab), The Dictator's targets are clearly Middle Eastern tyrants and terrorists like Iran's Ahmadinejad and Osama Bin Laden (the latter of whom is apparently still alive and staying at Aladeen's country house—we just shot his double), and the region's stereotypical disdain for human, female and minority rights. That becomes even more pronounced once Aladeen begins working with Zoe (who believes him to be a Wadiya dissident) and his fish-out-of-water circumstances result in one tactless incident after another, as when Aladeen is forced to deliver a baby and, upon learning it's a girl, disappointedly asks "Where's the trash can?"

Cohen's critiques are delivered with a gonzo bluntness that ignores any issues of propriety. While the overarching structure is herky-jerky and a climactic speech that draws parallels between American democracy and dictatorships is a bit too cutesy, there's enlivening go-for-broke energy to The Dictator's refusal to mince words about Middle Eastern mores and political agendas. Better still, those concerns comfortably coexist with dim-bulb silliness, such as during the aforementioned birth sequence that features an inner-vagina POV. Aladeen's efforts to thwart democracy while fending off the pesky liberal feelings that complicate his return-to-power make The Dictator's entire set-up a ludicrous stunt. Who—and what—are we rooting for? Be it the Israel-hating Aladeen realizing he's begun using Yiddish slang, or recurring gags about a decapitated head, body double deaths, and Zoe's hippie tomboyishness—not to mention a soundtrack with "Everybody Hurts" and "Let's Get It On" sung in made-up Wadiyan—Cohen and Charles' film melds goofball stupidity, stinging satire and blistering hilarity. In short: it rules.