close
Exactly what you're expecting

What to Expect When You're Expecting 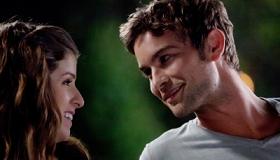 What to expect from What to Expect When You're Expecting: laughs, heart and a terrific ensemble of actors doing what they do best. After the recent surprise success of Steve Harvey's self-help-book-turned-movie, Think Like A Man, yet another unlikely screen adaptation from the advice section has been turned into a conventional comedy detailing five separate stories centered around pregnancy. With 35 million copies sold, the must (and most) read book for prospective parents totally delivers a nice platform for an entertaining, if disposable movie experience. The crowd of attractive and talented actors means audiences should have fun at this early summer counter-programming entry, though despite a sizable male cast, expect Expecting to chiefly appeal to women. Problem is: new parents—the demographic most likely to be interested in the flick—are usually the hardest group to get into theaters. Still, box office returns should be sweet, if nothing to scrapbook.

Using the segmented storytelling style of comedies like Valentines Day and New Year's Eve, What To Expect introduces us quickly to five couples in the throes of baby making. There's TV fitness queen Jules (Cameron Diaz) and dance show star Evan (Matthew Morrison) who try to juggle their middling celebrity status with the realities of pregnancy. There's childless Wendy (Elizabeth Banks) who likes doling out advice on babies until she has to taste her own medicine, while her hubby Gary (Ben Falcone) tries to compete with his dad (Dennis Quaid), now expecting twins with his much younger and attractive wife, Skyler (Brooklyn Decker). There's Holly (Jennifer Lopez), a photographer rarin' to adopt a child from any corner of the world while her immature husband Alex (Rodrigo Santoro) seeks help from a support group of men with babies. And there's young food truck chefs Rosie (Anna Kendrick) and Marco (Chace Crawford) who discover they're pregnant before they've even gone out on a date.

Best of all—and certainly the big attraction for any male dragged to this film—is that daddy support group led by the very funny Chris Rock and featuring comics Rob Huebel, Thomas Lennon and Amir Talai as a Greek Chorus of dudes with strollers who offer sage advice on how to survive your first kid. They break up the predictability of see-sawing storylines and put some real comic punch into the proceedings. As for the others, Banks fares best among the women but all of them do what is needed to make the thin, but agreeable material work as well as it does. Will Lionsgate decide to spawn a second? One is enough.