close
Go ahead—sink your teeth into it 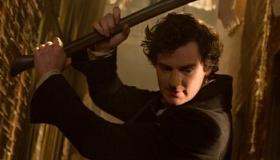 Abraham Lincoln: Vampire Hunter is the sort of silly, self-contained nonsense that should go straight to home video, a film that seems too ludicrous to be made by a big studio and put in front of millions of movie-going eyeballs. But all the same, here comes Timur Bekmambetov's cinematic reimagining of the 16th President of the United States' secret (read: fake) back story, complete with the director's trademark flash, style, and adoration of slow-motion. The plot is, of course, totally obvious: What if Abraham Lincoln was also a vampire hunter? Though it tries to wedge some history amongst the insanity, it's absolutely mindless moviemaking. It's also fun and weird and wacky-extreme popcorn cinema—and despite incomprehensible narrative choices and shockingly inept CGI, it's mostly a good time. While the film might not appeal to hardcore action fans (and certainly not history buffs), the teen set could give it brisk business as counter-programming to the younger-skewing Brave.

Taking some serious liberties with Lincoln's family life (surprise!), the film introduces Lincoln as an orphan bent on avenging himself against the vampire who killed his mother when he was but a lad. Lincoln (Benjamin Walker), the president famous for being assassinated, is here a wannabe assassin, but his first attempt at murdering his mother's undead killer fails miserably—teenage Abe is woefully unprepared to kill anyone, much less a vampire. And so he finds himself rescued by the mysterious (and delightfully hammy) Henry Sturgess (Dominic Cooper), who trains him in the arts of vampire hunting while demanding that Abe live a life apart from others—no family, no friends, no lovers, no career—which lasts peacefully only until Abe is drawn to two higher callings: the law and Mary Todd.

Though the film eventually lands on a central villain (a wasted Rufus Sewell), the real conflicts of Abraham Lincoln: Vampire Hunter center around Abe's desire to find a way to end the vampire problem for good so he can have a normal life with Mary Todd (Mary Elizabeth Winstead) while wielding his lawyerly skills in the political arena. This Lincoln is definitely invested in eradicating slavery and not just because of his personal relationship with an African-American childhood pal (the always delightful Anthony Mackie) or his natural gift for honesty and goodness—it's because Harriett Tubman and her Underground Railroad also helped him escape the vampires. Despite its bizarro history, Abraham Lincoln: Vampire Hunter takes itself far too seriously. It's not nearly as snappy or campy as it should be—though its self-seriousness is its own kind of entertainment. Having a sense of humor is mandatory for the audience.

Screenwriter Seth Grahame-Smith also wrote the original novel of the same name, which was no great literary shakes. But the book did stretch its bold concept to cover nearly all of Lincoln's life, a feat no film can exhaustively do. Even at a bloated 105 minutes (90 would have been more snappy and fun), the movie inevitably glosses over a number of big moments in Lincoln's life, dropping into situations, conversations, and relationships with little connective tissue between them. The only thing that holds it together is that the plot is just so simple—really, it's all in the title.

Technically speaking, the film is a far cry from something like Bekmambetov's overly slick Wanted. Abraham Lincoln: Vampire Hunter's 3D shots go for both depth and jump-out thrills, the film often looks just flat-out cheap, with the post-converted 3D mashing up with poor CGI to the point that this overwhelmingly false film even looks fake. At least the vampires of the film are suitably horrifying—big, toothy, snarling beasts who make the Twilight vamps look like Mouseketeers—and the film's large-scale action sequences (a training montage, a stampede chase scene, and a twist on the train robbery) are silly but thrilling. Though the film has zero blood, it's got enough bite and giggles to stave off summer boredom. Go ahead—sink your teeth into it.