close
As far as Pixar pix go, this one's not a bullseye 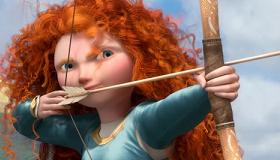 It was only a matter of time before Pixar released a feature centered around a woman. First they just had to make movies about a crotchety old man, a clownfish, a one-eyed monster, a rat with a penchant for cuisine, a decidedly male robot obsessed with Hello Dolly!, a cowboy with a pull-string (three of those), and someone trying so hard to overcompensate that they actually are a Porsche. But now all of that is out of the way, Pixar's 13th film gives us Princess Merida, a vivacious lass with deadly accuracy; she's a wicked archer beneath an explosion of wild red curls. Told on a small scale but fatally lacking the focus that such a confined story requires, Brave recounts Merida's legend, following the tumultuous maturation of the Scottish royal who was born to be a hunter but fated to be a queen. Poised to be Pixar's rebound from the critical disaster, Cars 2, Brave unfortunately wastes the studio's most winsome protagonist on their least interesting narrative, while appallingly dark 3D buries top-notch (if imaginatively confined) animation. Brave is sure to be a box office juggernaut, but Pixar's slipping track record and a lack of repeat business might result in a slight underperformance.

Brave's opening sequence is remarkable. Things begin with a spontaneously violent flashback that recalls the pre-credits horrors of Finding Nemo, soaring above the verdant hills of old-timey Scotland before landing on giddy young Merida (Kelly Macdonald). The rambunctious little girl roughhouses with her enormously strapping father (Billy Connolly), a fair and decent king whose wife, Queen Elinor (Emma Thompson) understands the royal responsibilities that await their daughter as she matures. Merida wanders off into the thick green forest to retrieve a wayward arrow when she gets distracted by a little bit of wispy magic and then, the next thing she knows, her father's leg is getting chewed off by a massive black bear. It's a lucid slice of storytelling, as elegant and evocative an introduction as one would expect from the folks who brought us Up and Wall-E. Those first few moments convey so much about Merida, her parents, and the world in which they live, that it's stupefying to see the 90 minutes that follow so thoroughly squander that foundation.

Cut to roughly a decade later, where Merida's painfully pointed fable-esque narration informs us that her adventurous spirit has survived puberty intact. Alas, the arrival of three potential suitors forces Merida into dramatic action, and so she asks a witch she conveniently encounters in the forest to change her mother's perspective, in the hopes that magic might help Queen Elinor appreciate her daughter's desire for a different life. Pixar's marketing has been careful about not revealing where the narrative goes from there, but—given that the supposed "twist" is essentially the film's inciting incident—I suspect that they were less interested in preserving mystery than they were in preserving interest. All the same, the rest of this review will divulge plot information that is fundamental to engaging in the plot.

SPOILER WARNING! The rest of this review contains spoilers.

So Merida's spell backfires and her mother turns into a bear, which is especially inconvenient because everyone in Brave really, really hates bears. This ursine riff on Freaky Friday is perhaps the least interesting story that could conceivably be told around Merida and her relationship with Queen Elinor—here are two strong women forced to navigate a primitive society of boorish men, and yet their most compelling moment together involves one of them trying to catch fish in her mouth. Their repeated attempts to sneak about the castle unseen speak to the marginalized roles they've come to inhabit, but the rest of the community is kept at such a distance that Elinor and Merida seem to exist in a vacuum of their own relationship, which is as sweet as it is mercilessly standard—a maternal crisis between a giant bear and a warrior princess shouldn't feel so numbingly familiar to anyone who's seen Fiddler on the Roof or The Joy Luck Club.

The irony of this body-switch premise is that Merida must turn her mother into a bear to relate to her as a person, but the particulars of their eventual understanding are thinly sketched, and dulled into irrelevance by the didactic process with through they reach it. Merida wants to change her fate (or so she intones) and Elinor wants to teach her daughter that pride must be tempered, and it's refreshing to see these two women learn from one another in a story that refutes the Prince Charming myth, but Brave is much easier to appreciate than it is to enjoy (and it's not even that easy to appreciate, as Japan's Studio Ghibli has built an empire from telling unapologetic stories about indomitable young ladies). Broad gags, an inert fantasy land, and a mess of lazy supporting characters divert the film from its potential, resulting in a story about transformation that doesn't earn its changes.

It's unusual to talk about a film at this length without mentioning the key creative players responsible for it, but that speaks to Brave's lack of an authorial touch—animation of this scale inevitably requires a great many filmmakers, Pixar's most satisfying efforts are steered by a singular vision, whereas Brave feels designed by committee. It would be specious to claim that the film's split personality is the result of a tumultuous production (Brenda Chapman, who conceived of this story, departed the project in 2010), but credited director Mark Andrews is unable to sift out the specificity required for this story to have a compelling reason to be told. Despite the rolling hills and the towering castle, Brave feels like Pixar's smallest film; Andrews is unable to infuse his film's handful of major locations with any sense of scope, and the story of Merida and her mom doesn't feel intimate so much as small. The film's unsteady sense of magic only adds to that insular quality, and Merida's magnificent hair can't sustain interest on its own. Most regrettably, it's hard to think of another animated film that has frittered away such wonderful and spirited vocal performances, as Macdonald and Thompson hint at a heart that Brave doesn't know how to bare.

There's no denying the film's refrain that legends are lessons, but Brave is sadly remedial. One can only hope that Merida's adventure empowers young women to take charge of their fate and write their own stories, because Brave is proof that the world could use some new ones.