close
Either you vote for him or vote “other." 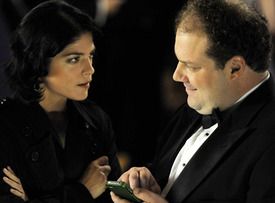 He's either daring you not to laugh or daring you not to care, but either way, you'll laugh, care and worry about the consequences in Dark Horse, the newest by uggo-auteur Todd Solondz. Superannuated 13-year-old Abe (Jordan Gelber) is huge, inside or out of his hummer, and threatens the employees of the local toy chain when returning his still-in-box action figures. He doesn't completely dismiss his tween-afflictions when he finds and forces a possibly heartless romance on dismal Miranda (Selma Blair), a girl fit for Abe because they're both so wayward. In their frightful union they lead us to no conclusions they'll help the other mature or live a better life; marriage is just another stop sign in the randomly designed universe of civic enterprise—a universe Abe knows only marginally from "working" in his father's planning/real estate office. Less explicitly funny than Happiness and not as aware of cult-allure as Welcome to the Dollhouse, Dark Horse has one big asset those others might lack: a leading title. Abe is enabled by his parents (Christopher Walken and Mia Farrow) and the creature comforts that come from living at home (a job he can't lose, three squares when he wants them) but his immaturity isn't laugh out loud funny—Solondz makes sure you see its perversity in a way that makes Adam Sandler, or comedies like Role Models, seem moot. Abe nurses a crush on the office secretary that's as much a fantasy of maternal nurturing as it is impetus to jerk off. And though his means of plodding through life is lazy and begrudging, his marriage proposal to Miranda's provides her an inertia she embraces at the cost of their future. This proposal is the film's single promise these characters can change, and its biggest indicator they won't. Edited in a way that makes every moment seem as emotionally out of sync as the characters, this one answers all of your anxieties with a vision so clean and comprehensive it puts you on a side without necessarily trying. By the end you either wish Abe dead or you hope he lives in dreams. There are some variations in between but, after this movie, you tell me if you care about them.