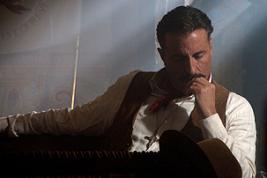 A relatively unknown chapter of recent Mexican history gets likely less than it deserves with For Greater Glory, a look at the Cristero War from 1926 to 1929 in which Catholics fought for the right to worship freely. Despite a cast that includes Andy Garcia, Eva Longoria, Oscar Isaac and even Peter O'Toole, the film's length and muddled message will likely keep it from reaching much of an audience, even within the presumed Latino faith-based target.

A few years after the Mexican revolution, newly elected president Plutarco Calles (Rubèn Blades) pushed through a number of laws to crack down on religious practice. Catholic clergy were not to wear their vestments in public and church bells did not ring for 3 years. A rebel faction, who dubbed themselves "Cristeros" took up arms against the government. A former general during the Revolution, Enrique Gorostieta (Andy Garcia) is recruited to transform a rag-tag bunch into an effective guerilla fighting force.

Directed by Dean Wright from a screenplay by Michael Love, the film is well over two hours and yet still feels thin on storytelling. It has its moments, but also has long saggy stretches that don't connect; ultimately, there's no sense of a larger tapestry, just sprawl. Rubèn Blades brings conviction to his role as villainous president Calles, in particular during scenes where Bruce Greenwood is the U.S Ambassador looking to broker peace with an eye to strengthening American oil interests in Mexico.

It's Garcia —who seems to choose his roles based on whether or not he gets to smoke a cigar onscreen —that arguably suffers the most from the screenplay's scattershot nature, as he must go from bold leader of men to simpering over a little boy in another. Other characters are similarly inchoate; in the end credits, as photos are matching actors to their real-life counterparts, Catalino Sandino Moreno is simply credited to the women of the Cristeros, and her character is indeed about that vague.

Filmed at historic sites and vistas, the film has a number of slow-motion shots of horses falling from gunshots that call to mind a less-gritty Wild Bunch, as does the film's go-for-broke final shootout. (While a high-stakes confession in the middle of a firefight falls flat.) The film never quite becomes the faith-based historical action epic it wants to be, as this Glory is more limply passable than anywhere near great.