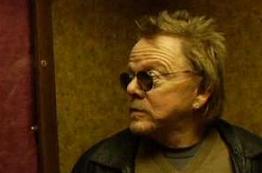 "I always thought he died too young," says director/narrator/protagonist Stephen Kessler at the beginning of Paul Williams: Still Alive. When he was 13, Kessler explains, the man he wanted to grow up to be was the songwriter and TV personality Paul Williams. When he discovered six years ago that his childhood idol was, per the title, still alive, many years sober and touring internationally, he went to a show in Winnipeg and decided to make a documentary about the 71-year-old Williams' life and career. The result is a funny, clever and fascinating first-person doc about a needy director chasing after his wise subject. Too bad the film's obscure star will be a hard sell to non-music geeks or anyone born after 1965, because this film's a blast.

Kessler remembers Williams as the man who "writes songs about how I feel," iconic songs from the seventies like Three Dog Night's "An Old Fashioned Love Song," Helen Reddy's "You and Me Against the World," The Carpenters' "We've Only Just Begun," The Muppet Movie's "Rainbow Connection," and A Star Is Born's "Evergreen," which garnered Williams an Oscar for Best Original Song. When Kessler starts showing clips from Williams' guest spots on television ephemera like Circus of the Stars and The Brady Bunch Variety Hour, I thought, Oh no, not another music documentary drowning in boomer nostalgia. Left to his own devices, Kessler might have produced something like Troubadours, the glossy, dutiful doc about the singer-songwriter scene in 70s LA, or even a feature-length episode of VH1's Behind the Music. Fortunately, Williams fights him every step of the way, refusing to conform to Kessler's preconceived narrative of him as a washed-up D-lister, or waste an iota of energy looking back at his drugged-out appearances on ancient talk shows.

In retrospect, it's almost surprising that there hasn't already been a documentary about Williams. He's a vibrant, wonderfully intelligent subject, and a dead ringer for Truman Capote. Short, snub-nosed and sly-witted, Williams pulls off the magic trick of being a likeably cagey interviewee. He's also full of suggestions: early in their encounter, he proposes to Kessler that the latter make the documentary "The Paulie and Steve Show," so that they can interact authentically, and he won't have to occupy "this weird sort of bullshit place where [I] pretend [I'm] not noticing the camera." The increasing closeness between artist and fan gives the film what little narrative propulsion it has. Williams and his music are such good company, though, that the documentary doesn't need to strain for suspense. The one time it does (Kessler nervously accompanies Williams on a short tour of the Phillippines, convinced that the singer's tour manager will get their group kidnapped by jungle terrorists) and the outcome is embarrassing, clunky and not a little racist.

It's on a long bus ride in the Philippines that Kessler and Williams finally become confidants. By that point, the director confesses, he had been shooting his former idol for more than four years, mostly because he didn't want to stop hanging out with him. But his access to Williams turns out to be a double-edged sword, not only because the documentary is exhaustingly from one (uninteresting) fan's perspective, but also because it's so circumspect about important aspects of Williams' post-fame life. There's scant information about Williams' romances or marriages, for example, and much too little about his financial well-being, a relevant matter as it relates to his new job as the President of the ASCAP, which protects the rights of songwriters like him. Perhaps most frustratingly, the documentary offers no insight into Williams' songwriting process, or whether he's still writing new songs. (A quick Google search says yes: Williams has collaborated on a few songs with Daft Punk on their upcoming album.) But that's the nature of us fans: we always want more.