close
A milquetoast movie but Fonda brings the love 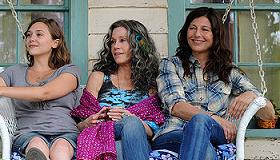 A yuppie mother runs to her long-lost hippy momma when her marriage implodes in a New York minute. Catherine Keener takes her kids—coed Elizabeth Olson and future filmmaker Nat Wolff—from their high-end Manhattan apartment to the forests of Woodstock, where things haven't changed since Hendrix played and mom (Jane Fonda) still deals grass and sculpts mud. Keener is a giant rejection of her semi-reliable spirit mother, and flashes resentment when her kids take to Fonda's flighty ways; they've been estranged to preserve stability, and that only amplifies the keen anthropology of Woodstock which is loaded with full moon dances and the passings around of iffy "teas." It may be the only place on earth that the love of medicated strangers seems so totally convincing, and when Keener's vegetarian daughter falls for the town's philosophical butcher (hottie Chase Crawford) she's at a crossroads she can't begin to reveal to her overcommitted, over-conflicted mom. Son Wolff discovers art with the assistance of grandma, who loves to talk of "energy" and acts as if she's waited 65 years to be the right-headed matriarch she is today—now that she's graduated the purgatory of her daughter's estrangement. A lover (Jeffrey Dean Morgan) both divides the mothers and unites them (a turn that's intermittently grody and stupid) but for audiences who remember the left wing allure that Jane Fonda brings no matter where she goes, it's a great (if middle-of-the-road) family comedy to seek out.